Satyameva Jayate 2 is slated to release on October 2, 2020. Starring John Abraham and Divya Khosla Kumar in the lead, this film will be produced under the banner of T-Series and Emmay Entertainment. 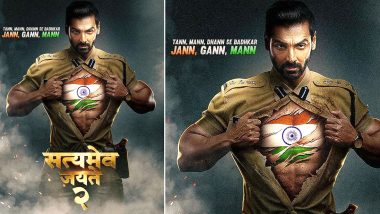 The 2018 film Satyameva Jayate starred John Abraham and Manoj Bajpayee in the lead. Directed by Milap Zaveri, the film received mixed reviews from critics, however, it opened to positive reviews from fans. In fact it even had the highest opening day for an A-rated film. It was in September 2018 when the makers had confirmed a sequel to this commercially successful movie. Satyameva Jayate 2 also features Divya Khosla Kumar as the lead actress, which will also be directed by Milap Zaveri. Toofan, Satyameva Jayate 2 and Udham Singh To Clash on October 2, 2020.

Satyameva Jayate 2 is slated to release on October 2, 2020. In an interview to a leading tabloid, the director has dropped a hint about the film’s storyline. Satyameva Jayate 2 is based on the fight against injustice and misuse of power. Talking to Mirror, director Milap Zaveri was quoted as saying, “The first film dealt with corruption, but with part two, corruption in all spheres—from the police to politicians, industrialists, the common man—will be tackled.” Satyameva Jayate 2: Divya Khosla Kumar Is Excited to Play the Female Lead Opposite John Abraham.

The filmmaker also stated that he intends to make one movie in the franchise every two years. About it he further revealed to the tabloid, “Like Sylvester Stallone has done Rambo, I will keep making Satyameva Jayate with John addressing new issues. He will keep growing older but will continue to fight corruption in the series.” Satyameva Jayate 2 that is scheduled to be released on Gandhi Jayanti 2020 will be produced under the banner of T-Series and Emmay Entertainment.

(The above story first appeared on LatestLY on Dec 31, 2019 09:15 AM IST. For more news and updates on politics, world, sports, entertainment and lifestyle, log on to our website latestly.com).