Are you ready watch Shah Rukh Khan and Priyanka Chopra dive in space? 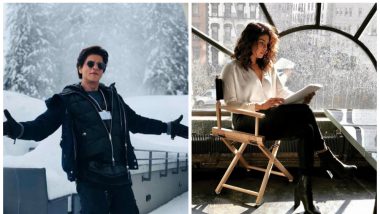 Biopics have become the latest favourite genre when it comes to us desi fans. Compared to the earlier era, the filmmakers are more inclined towards bringing the inspirational personalities on the silver screen. Two of such motivational figures are astronauts Rakesh Sharma and Kalpana Chawla. Their feat in the space is commendable and it will always be a delightful watch to see their journey on the big screen. To do this job, Bollywood superstars Shah Rukh Khan and Priyanka Chopra have stepped in! While SRK will reportedly play the role of Rakesh Sharma in his biopic (reportedly titled as Salute), PeeCee is set to do the role of Kalpana Chawla.

A source earlier told DNA, "SRK will wrap Zero by April end, after which he will be busy for the next three months prepping up for his character in Salute. He will be doing his own research with his team and studying the nuances to play the astronaut. That’s why he’s taken a three-month break in between to devote himself fully to the biopic."

Also, there have been reports that Piggy Chops has been prepping up for the movie since long. Debutante director Priya Mishra had earlier told a leading daily, "I have been working on it for the past seven years. A new production banner will back the project." On the other hand, an insider told, "Priyanka's team has been involved in the project and have been planning the legwork of the film for past one year."

Well, that calls for a celebration as two of the most followed and talented Bollywood biggies are on board for the project. We hope that the makers choose to avoid the clash of these films as we honestly would want both these projects to fare well at the box office!

(The above story first appeared on LatestLY on Mar 17, 2018 07:26 PM IST. For more news and updates on politics, world, sports, entertainment and lifestyle, log on to our website latestly.com).