Shah Rukh Khan takes a dig at himself while celebrating #3YearsofRaees. 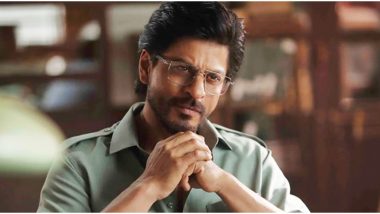 Raees is probably Shah Rukh Khan's one of the best movies - of course, that's according to us and we swear by it. He still makes us go weak in the knees with his kohl-rimmed eyes that perfectly gelled with his anti-hero character. Directed by Rahul Dholakia, Raees managed to lock horns with Hrithik Roshan's Kaabil and today marks its three-year anniversary. SRK took to his social media accounts to celebrate his special day by sharing in a video with all his fans and admirers. Shah Rukh Khan Posts a New Picture for the Sake of Trying a Filter and We Are All For It Considering His Amazingly Cool Look!

In the video, you can see him mouthing the film's very famous dialogue of “Koi bhi dhandha chhota ya bada nahi hota, aur dhandhe se bada koi dharma nahi hota." And towards the end, he's interrupted by someone saying, Abbe, tu jaldi se picture chalu kar na! Dhandha-dhandha kar raha hai, kuch kar nahi raha! Got that? Yes, that was him taking a dig at himself for not announcing his new project since Aanand L Rai's Zero in 2018. SRK' next release is making headlines for the longest of time now. And while there are reports of him working with Atlee, Raj & DK and even Rajkumar Hirani, the actor is yet to make a formal announcement regarding the same.

3 yrs of Raees. One of the most fun I had making a film. Thks to cast & crew & my producers. Maybe need to take Raees’ advice myself...soon! pic.twitter.com/D33wZtAimN

Speaking of which, Raj & DK in their recent conversation with Rajeev Masand confirmed the reports of collaborating with SRK for their next. When asked if the rumours of them approaching the star are indeed true, Raj said, "We have narrated a story a few months ago, and Shah Rukh loved it. We are in talks. He wants to do it and he said that we’ll do it. The news is not out (officially) but it leaked a couple of times. So I think I can talk a little bit about it. Because (until now), we have kept mum. It’s not like Shah Rukh said ‘Don’t tell a word’. Like, we didn’t talk about the Russo project till it came out. I guess if we hold it too long, then it leaks!” So here's hoping the cat comes out of the bag very soon.

(The above story first appeared on LatestLY on Jan 25, 2020 05:58 PM IST. For more news and updates on politics, world, sports, entertainment and lifestyle, log on to our website latestly.com).