Shahid Kapoor Misses Being On The Sets Of Jersey (View Pic)

Jersey Hindi remake will feature Bollywood hunk Shahid Kapoor in the lead role. It is a remake of the Telugu film of the same name in which actor Nani had played the lead role. 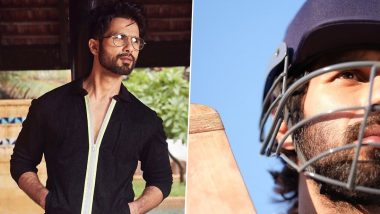 Jersey Hindi remake will feature Bollywood hunk Shahid Kapoor in the lead role. It is a remake of the Telugu film of the same name in which actor Nani had played the lead role. Before lockdown, Shahid had shared a few pictures and videos from the sets of the film and also gave a glimpse of the practice sessions. But everything had to be stalled owing to the coronavirus outbreak. Until the lockdown is not lifted, the shooting of films and other TV shows cannot be resumed. And guess what, Shahid Kapoor is already missing being on the sets of Jersey. Shahid Kapoor Says Nani Was Fantastic in Jersey, Reveals He Cried After Watching the Telugu Film.

Shahid Kapoor will be seen playing the role of a cricketer in Jersey Hindi remake. Directed by Gowtam Tinnanuri, the story revolves around a 36-year-older cricketer who had put an end to his cricket career almost a decade ago but now plans to play for the Indian team all over again. Shahid has given a glimpse of his look from the film in his latest Insta post. You can see him sporting a rugged look, holding a cricket bat in his hand. While sharing the picture he captioned it as, “#Jersey sets. #imissyou.” Jersey Actress Mrunal Thakur Is All Praises For Shahid Kapoor!

Jersey Hindi remake also features Mrunal Thakur and Pankaj Kapur in the lead role. This movie is produced by Allu Aravind, Dil Raju and Aman Gill and it is slated to release on August 28. But seeing the ongoing crisis, one cannot predict if the film will manage to hit the theaters as per the schedule.

(The above story first appeared on LatestLY on May 11, 2020 12:49 PM IST. For more news and updates on politics, world, sports, entertainment and lifestyle, log on to our website latestly.com).