Sherni Movie Review: It's a Roaring Vidya Balan Show in This Social Drama That Feels a Weaker Followup to Newton (LatestLY Exclusive) 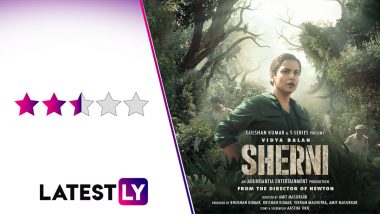 Sherni Movie Review: Amit Masurkar's third film as a director, Sherni, has quite a few things common with his breakout success, his sophomore movie Newton. Both the films revolve around protagonists who are upright government employees, and both are set against the backdrop of forests. In both the movies, there is always a perceived threat - in Newton, it was the invisible Naxalites. In Sherni, it is a hungry tigress. And as the films progress, we realise that the real danger is the rot within the system rather than the ones we are told about. OTT Releases Of The Week: Vidya Balan’s Sherni on Amazon Prime Video, Dhanush’s Jagame Thandhiram on Netflix, Asha Negi’s Khwabon Ke Parindey on VOOT Select.

While that template is now established, let's hear what Sherni has to say. Pardon my lack of grasp on shuddh Hindi, but the Wikipedia page of the film reminds me that Sherni in English means 'lioness' and not the tigress as the film tries to portray (in Hindi, tigress means baghini). Perhaps this misnomer is deliberate. Like the arrogant hunter Pintusaab (Sharat Saxena), who can't differentiate between leopard and tiger droppings, even we are equally clueless about the animals that are dwindling towards extinction.

Or maybe the Sherni is for the protagonist, Vidya Vincent (Vidya Balan). A recently appointed DFO in a forest area in Madhya Pradesh, Vidya finds herself in need to tackle a tigress tag-named T12 who has proceeded from killing the nearby village's cattle to the villagers themselves. Her fledgling experience in the government service means that her idealism is intact, and yet unlike Newton's protagonist, she is already tired of being a wheel in a cogged up system.

As someone who wants to abide by the rules, Vidya doesn't want to kill the tigress, but rather let it get back to the forest terrain, while leaving the villagers unharmed. With the help of a local zoology professor Noorani (Vijay Raaz), she tries to capture the tigress alive but faces enough roadblocks on the way.

While T12 proves elusive enough, what poses a bigger challenge for Vidya are the men around her, from a clueless boss (Brijendra Kala), to opportunistic politicians to the aforementioned hunter Pintu, who aims to have the tigress as his next trophy.

Not sure I know the last time Bollywood made the workings of Forest Service. We have had movies on animal conservation, but they have been more about opportunity for the alpha male to flex his muscles and save the beasts of the jungle. Case in point, Vidyut Jammwal's Junglee. Real life is far more bleak and kinda nihilistic, which both Vidya and we learn, as the alpha males here are more about winning one over the beasts from whom we took the land from. Sherni Song Mein Sherni: Vidya Balan's Track Wakes Up The Tigress In Every Woman.

Sherni is clear about how humans have been intruding into the lands of the animals, through farming and mining and habitation, that the beasts can't help but cross over to human habitats out of hunger and desperation. The social messaging is apt for these times, and Sherni showcases the lethargic working of the bureaucracy, burdened by the political machinations as stark as you expected.

The first act, especially, doesn't waste time in showing Vidya's frustration over dealing with sycophantic colleagues, appeasing to conniving political leaders to maintain peace (subtle digs at vacuous promises of progress, security and safety cannot be missed) and trying to protect the hapless, desperate locals from getting themselves into harm.

It is good to see films like these address the issues of the interiors that mainstream media usually avoid to discuss. Which is also why the scenes where news channels hotly 'discuss' the tigress' exploits felt more of an flaky aberration in an otherwise realistic film. A feeble attempt to seek satire.

Here's where the problem comes, though. While Sherni may feel like in the same league as Newton, it doesn't have the same witty narrative as its predecessor. So, while both movies are languorously paced, Sherni feels more heavy and slower, especially in the middle portions. The occasional doses of Masurkar's black satirical humour, that we saw replete in Newton, comes through, particularly in the scene where Vidya's attempt to capture the tigress is ruined by an over-eager mob of the local legislator. If you expect Sherni to surprise you, then you might be disappointed for the movie moves along very predictable beats, at times feeling like you are watching a docudrama. Vidya's family issues feel like a shoehorned attempt to discuss on a married working woman's situation that hampers the already slow pacing of the film.

Vidya Balan is truly excellent in the lead role, and as a fellow Mallu, it feels pleasant to see her speak in Malayalam. The strength in her performance lies more in how she expresses her anguish through her eyes and gestures rather going for verbosity. The rest of the cast fit in their roles seamlessly, be it Vijay Raaz or Brijendra Kala or Sharat Saxena. Yet, the supporting characters do not get room to stand out as it stays obsessed with the stoic protagonist.

Sherni feels like a genuine companion piece to Masurkar's Newton, dealing with social issues that are rarely discussed on news channels and with a fantastic cast, led by Vidya Balan. Yet, compared to Newton, Sherni comes across as a weaker followup that lacks the witty narrative which made the former stand out. Sherni is streaming on Amazon Prime Video.

(The above story first appeared on LatestLY on Jun 18, 2021 12:12 AM IST. For more news and updates on politics, world, sports, entertainment and lifestyle, log on to our website latestly.com).