Sonam Kapoor Slams False Reports Suggesting That Anil Kapoor Tested Covid Positive, Says ‘Saw Incorrect Information Before I Could Even Speak to Him’

A few days ago, Neetu Kapoor had also shared a video on social media of her undergoing the Covid-19 test. The video showed her taking the swab test and giving a sneak peek into the safety measures taken by the production house. 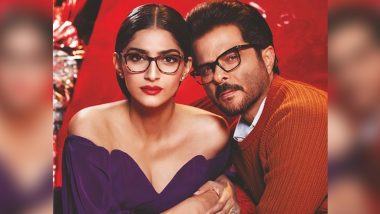 Anil Kapoor was all over the news yesterday when the news broke that he had tested positive for the Covid-19 virus. The actor has been shooting for his upcoming film Jug Jugg Jeeyo. However, the actor later tweeted and clarified that he has tested negative for the virus and the reports circulating in media are not true. This did not go well with his daughter Sonam Kapoor who slammed these false reports and expressed her anger through a social media post. Varun Dhawan, Anil Kapoor, Neetu Kapoor Test Positive for COVID-19, Jug Jugg Jeeyo Shoot Paused.

She took to Twitter to slam these misleading reports and lashed out on certain sections of the media for sharing false reports about her father’s health. The actress, who is in London with her husband Anand Ahuja, said in her tweet that she read these false reports even before she could talk to her dad and was very upset about the irresponsible reportage.

False reporting is dangerous. I’m sitting in london and I see incorrect information peddled by some parts of the media before I can even speak to my father. Please be responsible in your reportage. https://t.co/wJOdbeXxKu

Sharing an update on his health, Anil Kapoor had tweeted yesterday saying, "In the interest of putting any rumours to rest, I have tested negative for COVID-19. Thank you all for your concern and good wishes." Reports suggested that Anil along with other cast and crew members of Jug Jugg Jeeyo had tested positive for the disease. This included Varun Dhawan, Neetu Singh and director Raj Mehta as well.

Sonam shared an update on the crew's health as well and said, "My father is fine and so is his team. I wish a speedy recovery to everyone else. All my love and prayers.” Jug Jugg Jeeyo: Maniesh Paul Joins Varun Dhawan, Kiara Advani’s Next.

A few days ago, Neetu Kapoor had also shared a video on social media of her undergoing the Covid-19 test. The video showed her taking the swab test and giving a sneak peek into the safety measures taken by the production house (Dharma Productions) on the sets. The shoot of the film which also stars Kiara Advani, Prajakta Kohli and Maniesh Paul has reportedly halted as we wait for Neetu and Varun to also react to these rumours.

(The above story first appeared on LatestLY on Dec 05, 2020 08:50 AM IST. For more news and updates on politics, world, sports, entertainment and lifestyle, log on to our website latestly.com).