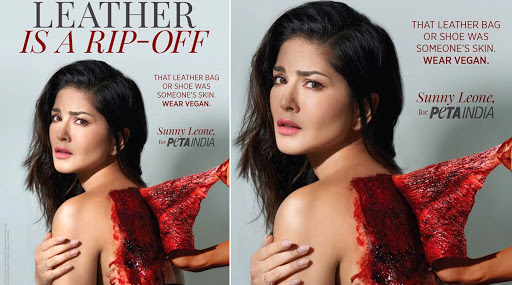 Sunny Leone just posted the new PETA campaign poster which was unveiled at the Lakme Fashion Week 2020. It's brutal and once seen, you can't unsee it. The picture has Sunny in pain as her skin is ripped off of her like how animals are skimmed for their leather. It's a very vivid campaign that will get the desired responses. Her caption reads, "Let's go fake for animals' sake.' It will take you some time to figure out what exactly is the picture about and when you do, it will stay with you for long. Sunny Leone to Headline a Comedy Web Series, Says ‘It’s Always Good to Put a Smile on Someone’s Face’

PETA's campaign may not be brand-friendly as they would never want customers to opt for fake stuff over their originals but animal cruelty needs to end.

Sunny has been part of PETA's campaign before as well. Once she even urged people to adopt homeless cats and dogs. Sunny walked the ramp at the event for Swapnil Shinde who exhibit casual chic fashion. She was the show-stopper wearing a Cinderella printed black T-shirt paired with black shorts, baggy jacket and boots. She looked quite funky!