While a host of actors and actress, both television and Bollywood paid their respected to condolences to Sushant, his Kedarnath co-star, actress Sara Ali Khan also took to Instagram to share a bittersweet memory. 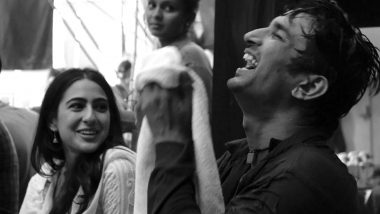 Actor Sushant Singh Rajput’s suicide on June 14, has led to the whole hush-hush discussion about mental health, especially in Bollywood, to come to fore. Sidhant hung himself at his Bandra residence and by the time he was discovered, he had passed away. The actor’s suicide came as a huge shock to many. It is being reported that Sidhant was battling depression and in fact was even taking medication to battle the same. However, mental illness ultimately took its toll. Sushant Singh Rajput's Team Issues Statement, Asks His Fans To 'Celebrate His Life and Work'.

Sara had nothing to say but her post and her caption of heart emojis said it all- that she will miss Sushant a lot. Sara and Sushant hit it off well during the filming of Kedarnath and the duo was so pally that they were even linked together. 5 Pictures of Sara Ali Khan and Sushant Singh Rajput From Kedarnath Wrap-Up Party That Prove They Share a Crackling Chemistry.

Sushant’s last rites will be taking place on June 15 in Mumbai after his father and sisters fly down on June 14 from Patna. Sushant Singh Rajput, indeed, a star gone too soon. You will be sorely missed SSR! May you rest in peace.

(The above story first appeared on LatestLY on Jun 14, 2020 10:48 PM IST. For more news and updates on politics, world, sports, entertainment and lifestyle, log on to our website latestly.com).