Sushant Singh Rajput's Father Is Not on Twitter, Certainly Not Tweeting About a CBI Probe

Sources close to the family also told PTI that they have not issued any statement after June 27. The family has also not given any media interviews or shared posts on social media. 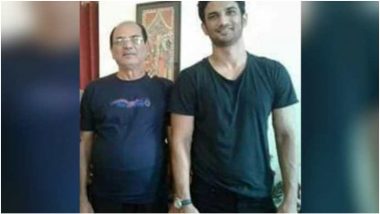 The numbers of fake news doing the rounds concerning Sushant Singh Rajput after his death are unaccountable now. People need to be more sensitive and cautious. Earlier, MNS Chief Raj Thackeray had to clarify that the party has not asked the artist facing nepotism to come forward to get help after Sushant's passing. Now, journalists have rubbished the earlier reports that suggested Sushant's father has joined Twitter and has appealed a CBI enquiry into his son's death. Raj Thackeray Rubbishes Reports of MNS Helping Artists Facing Nepotism After Sushant Singh Rajput's Death.

A Twitter handle has popped up claiming to be Sushant's father Mr KK Singh. The reports of the Twitter handle asking for a CBI probe were carried by agencies like IANS, and the syndicated copies were carried out by various other outlets like The Tribune, Times of India, Times Now, Outlook India and several others. LatestLY exercised caution and did not publish the agency news.

Now, Bollywood Hungama has reported that KK Singh's Twitter handler is an imposter. BH wrote, "Mr KK Singh has stated that he does not have any twitter account and has urged people behind that twitter account to not create confusion in people's mind by posting details about the investigation in his son's sad demise." Manoj Bajpayee, Milap Zaveri, Vir Das Call Out KRK Over His 'Fake Behaviour' Towards Sushant Singh Rajput After His Death.

Sources close to the family also told PTI that they have not issued any statement after June 27. The family has also not given any media interviews or shared posts on social media.

Earlier, Sooraj Pancholi had to come out and clarify that he has not even met Disha Salian, Sushant's ex-manager, who also had died by suicide a few weeks ago.

(The above story first appeared on LatestLY on Jul 04, 2020 10:15 PM IST. For more news and updates on politics, world, sports, entertainment and lifestyle, log on to our website latestly.com).