Manoj Bajpayee, Milap Zaveri, Vir Das Call Out KRK Over His 'Fake Behaviour' Towards Sushant Singh Rajput After His Death

Milap shared a video compilation of two clips to call out KRK. In the first clip, KRK is bashing Sushant for his acting in Kedarnath, saying some of the vilest things about him. In the subsequent clip, KRK is seen shedding 'tears' over Sushant's death. Earlier, the fans of Sushant had also called out KRK over his hypocrisy. 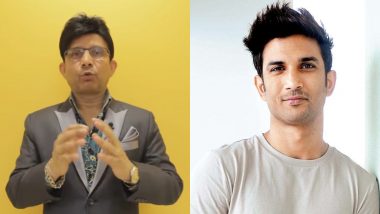 This is not the first neither the last time that member of the film industry are calling out Kamaal R Khan (KRK). The Deshdrohi actor has gained a controversial image as a film critic and box office analyst over the years for his use of crude language. He is now being called out by the likes of Milap Zaveri, Rakul Preet Singh, Manoj Bajpayee and many others for faking his sympathy over the death of Kedarnath actor Sushant Singh Rajput. Gulabo Sitabo: KRK Takes a Dig at Shoojit Sircar’s Latest Release and the Director’s Epic Response Is Winning Netizens’ Hearts.

Sushant died by suicide on June 14 at his Mumbai residence. Milap shared a video compilation of two clips to call out KRK. In the first clip, KRK is bashing Sushant for his acting in Kedarnath, saying some of the vilest things about him. In the subsequent clip, KRK is seen shedding 'tears' over Sushant's death. Earlier, the fans of Sushant had also called out KRK over his hypocrisy. #FakeKRKRealCulpritofSushant was a trending topic on Twitter.

Milap called KRK the true face of fraud. Adding to it, Hansal Mehta and Vir Das called KRK "parasite". No, not the Oscar-winning movie. He wishes. Check out below how the industry is taking KRK to the cleaners.

Check Out Milap Zaveri's Tweet That Set The Ball In Motion

This is the true face of the fraud and disgusting Krk. Today he is trying to profit off a tragedy with his fake tears. But the reality is that he was horrid to Sushant while he was alive. Krk is the one insulting the departed with his fake behaviour. Time to stop such people. pic.twitter.com/KcOBwkirCD

Manjon Bajpayee Retweeted It And Wrote

With you on this @zmilap also urge the people from the industry who mentor these elements to stop doing so else KARMA is waiting ....!!! https://t.co/dXnUVoAFNW

Reality of this so called business of Bollywood I still remember @imbhandarkar sir Page3 https://t.co/LTdVfYqorh

A petition based on Krk's tweet got over a million signatures in a day in the name of Justice for Sushant https://t.co/z2uWaynNTR

Milap this parasite Krk deserves to be shamed and punished. He has repeatedly said nasty things about so many people particularly about Sushant and now he is trying to deflect. What is more shameful that this abusive scum is still patronized and followed by industry people. https://t.co/YyPnyzmOqq

He's a parasite who has consistently attacked people who were too dignified to respond. I'm happy you're calling him out. Let gutter trolls stay in the gutter.

That one malicious tweet that wasn't even true! So glad he's being called out! Hope some of our friends also stop being nice to him. So proud of you, Milap! @BajpayeeManoj

Despite the constant use of disgusting language, KRK continues to get support from the public and even the film industry. Ekta Kapoor's production house cast him in a small role in the film, Ek Villain. Amitabh Bachchan launched KRK's website. His reviews garner thousands of views on YouTube.

(The above story first appeared on LatestLY on Jul 04, 2020 04:43 PM IST. For more news and updates on politics, world, sports, entertainment and lifestyle, log on to our website latestly.com).