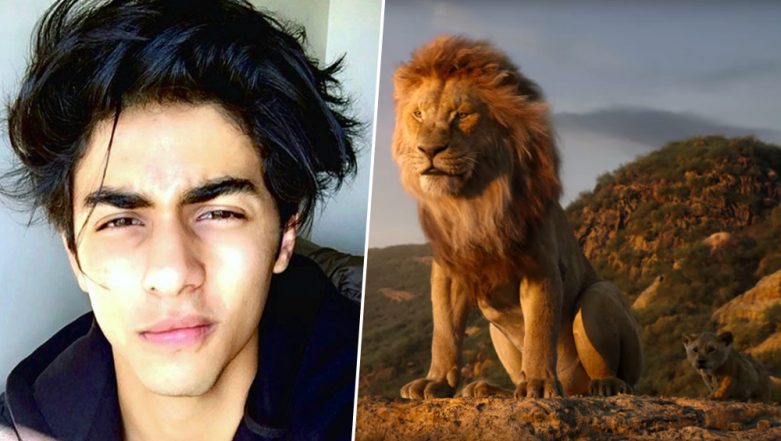 The Lion King reboot has been one of the most anticipated films from Disney. It has been hard to digest for fans of 1994 original to know that the iconic film is being remade but after the first reactions from the film's special screening were seen, it seems that Jon Favreau has successfully managed to revive this classic. In India, the excitement for this film has been even more for its Hindi version considering Shah Rukh Khan and his son Aryan Khan have teamed up for the film's voiceover for the father-son characters of Mufasa and Simba respectively. After we saw a teaser of Shah Rukh's amazing voice as Mufasa, the new teaser video shows and Aryan Khan's voice as Simba. The Lion King Teaser: Shah Rukh Khan's Deep Voice For Mufasa Will Win Your Heart Instantly (Watch Video).

The video features Simba's iconic dialogues where he talks about his father Mufasa's wisdom and his advise to Simba on finding his place in the circle of life. We have to say, Aryan Khan not only impresses us with his strong dialogue delivery which has a bang on impact but also that his voice bears immense similarities to that of his father Shah Rukh Khan. Looks like the father-son are all set to make the Lion King experience a memorable one for us.

Check out the new teaser with Aryan Khan's voice here:

The new teaser was posted by Shah Rukh on his Twitter account and we loved how the proud father caption the video. Sharing the new teaser, Shah Rukh wrote, "My Simba". Isn't that the sweetest? In the international version of the film, the voiceover of Simba has been done by Donald Glover whereas Mufasa's voice actor is James Earl Jones. The Lion King First Reactions: Disney's Live-Action Film Wins Big Praises for Its Visual Appeal and Emotional Essence at the Premiere.

The international premiere of The Lion King took place recently and it was a star-studded event what with the lead cast including big names such as Beyonce Knowles Carter, Donald Glover, John Oliver, James Earl Jones were in presence. The live-action has been helmed by Jon Favreau of The Jungle Book fame and is all set for a worldwide release including in English and Hindi on July 19.