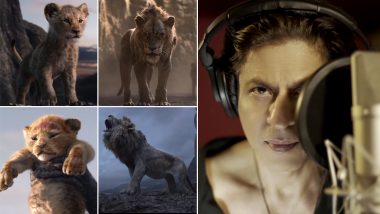 The fans are desperately waiting for the much-loved film, The Lion King. Disney is bringing to us as a photorealistic computer-animated remake which is also a musical drama. Bollywood fans have even more excited as Shah Rukh Khan and his son Aryan Khan are stepping into the shoes of Mufasa and Simba, respectively in the Hindi version. The makers released the teaser and it is AMAZING! The Lion King: New TV Spot Gives Us a Glimpse of Beyonce and Donald Glover's 'Can You Feel the Love Tonight' Duet and It's Beautiful!.

Once you watch this brand new teaser, you will know how SRK was actually an apt choice to lend the voice to Mufasa. The fatherly advice and the intense vibes are just too damn perfect. Of course, the makers have still not introduced Aryan but maybe that's the story for another teaser! Visually, the video will take you on a ride of nostalgia as the scenes will remind you of the original animated version of the film. Check out the teaser below.

The fans were over the moon with this The other Bollywood personalities who have lent their voice in the film are Asrani, Ashish Vidyarthi, Vijay Mishra, Shreyas Talpade. The film is directed by Jon Favreau and also co-produced by him along with Jeffrey Silver, Karen Gilchrist. Tell us your thoughts on this brand new teaser in the comments section below.

(The above story first appeared on LatestLY on Jun 28, 2019 01:13 PM IST. For more news and updates on politics, world, sports, entertainment and lifestyle, log on to our website latestly.com).