Tony Kakkar Opens Up on How Sister Neha Kakkar Inspires Him

Tony Kakkar has gained popularity by belting out foot-tapping numbers such as Dheeme dheeme, Coca Cola, Kurta pajama and Shona Shona among others. He says the endeavour is to make every track better and bigger than the last one, and also reveals how his sister, star singer Neha Kakkar, inspires him. 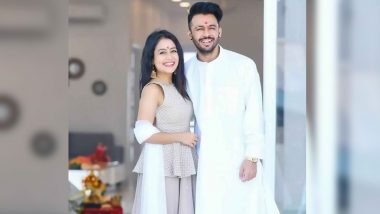 Tony Kakkar has gained popularity by belting out foot-tapping numbers such as "Dheeme dheeme", "Coca Cola", "Kurta pajama" and "Shona Shona" among others. He says the endeavour is to make every track better and bigger than the last one, and also reveals how his sister, star singer Neha Kakkar, inspires him. Tony, brother of singers Neha Kakkar and Sonu Kakkar, is once again topping the charts with his new track "Number likh", with "Bigg Boss" star Nikki Tamboli. The song dropped last month and currently has over 46,370,460 views and 951K likes on YouTube. Number Likh: Nikki Tamboli Shares Poster of Her Upcoming Song Featuring Tony Kakkar (View Pic).

On whether expectations add to pressure to come out with tracks that can outdo his previous hits, Tony told IANS: "It always pushes me to do better. The endeavour is to make every song better and bigger than the last one. It's all about being true to your art, driving your uniqueness that sets you apart. As long as you're honest about who you are inside out, the expectations only empower you more." The 37-year-old singer hails from Rishikesh. His family later shifted to Delhi in the1990s, where he along with his sisters Sonu and Neha sang at jagratas. It was in 2012 that he made his debut in Bollywood as a music director, with the film "Mr. Bhatti On Chutti". Bigg Boss 14’s Jasmin Bhasin Talks About Working with Beau Aly Goni in Tony Kakkar’s Song Tera Suit.

In less than a decade, life has changed courtesy hits such as "Car mein music bajaa", "Das ki karaan", "Bijli ki taar", "Goa beach", "Booty shake", "Chocolate" and "Tera suit" among many more. Looking back at his journey, Tony, who has often faced flak on social media over his repetitive lyrics, tags it as a "satisfying one". "It has been a satisfying one. That's for sure. But it's also about working hard and being open to growth -- whatever shape it may take. That's something that is inspired by Neha. She has a hit in almost every genre!" he said.

Tony currently enjoys a fan following of eight million on Instagram and 408K on Twitter. Does he feel he is ruling the music industry now? He said with a laugh: "There are many ways to think about success. But what's more valuable to us is to measure how we have grown. Everyone in the industry is kind and warm. It's important to be humble and it's important to be unique." Tony recently performed on the app MX Takatak, he says: "We hope to return again soon for a surprise with some of our musician friends. The opportunity for the fans to go live with their favourite musicians, interact with them and also perform with them -- that's new and I've never heard of anyone doing this."

(The above story first appeared on LatestLY on Jul 21, 2021 09:31 PM IST. For more news and updates on politics, world, sports, entertainment and lifestyle, log on to our website latestly.com).