Street Dancer 3D releases on January 24 and before that happens, Varun Dhawan starts the Muqabla Challenge. But it's open only to fans! 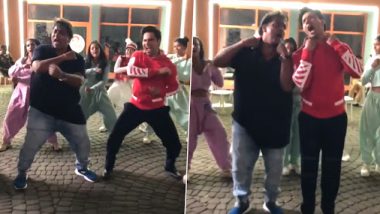 Varun Dhawan will have his first Republic Day release next year with Street Dancer 3D. The trailer was out recently which looks more like a game of India-Pakistan rather than a dance film. Anyway, one thing that stood out was Prabhudheva dancing on the Muqabla song. We grew up watching him dance on that and we love watching him do that again. Guessing the euphoria of the song, that was the first track that was released post the trailer. With promotions on, Varun Dhawan has thrown a Muqabla challenge now. Street Dancer 3D Song Muqabala: Shraddha Kapoor-Varun Dhawan Recreate the Iconic Track with Prabhudheva, and It Is LIT! Watch Video

Varun showed the signature step from the song along with Ganesh Acharya and uploaded the video on his Instagram account asking ONLY his fans to do it. So you will be spared the incessant video uploads of celebs dancing on the same.

Street Dancer 3D releases on January 24. The trailer of the film has managed to get the audience's applause. It has an India-Pakistan rivalry in the premise which might work out in the present scenario. It will also be a refreshing change to see the rivalry on a dance floor rather on a cricket field or LOC.

(The above story first appeared on LatestLY on Dec 24, 2019 01:05 PM IST. For more news and updates on politics, world, sports, entertainment and lifestyle, log on to our website latestly.com).