Rattan Chopra was diagnosed with cancer in January. Sources close to him insist that the former actor had requested Dharmendra, Akshay Kumar and Sonu Sood for some monetary help but never received any replies. 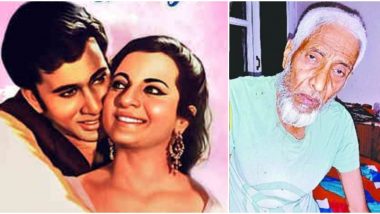 Veteran actor Rattan Chopra who shared the screen space with Tanuja in 1972 film Mome Ki Gudiya breathed his last on June 12. He was diagnosed with cancer in January this year but had no money for his treatment. He was unmarried and had adopted a girl child. Anita, the same adopted daughter confirmed the news of his sad demise while highlighting how he couldn't afford the expensive treatment for cancer. Rishi Kapoor Dies At 67, Veteran Actor Amitabh Bachchan Confirms the Sad News.

Rattan Chopra lived in extreme poverty and was surviving on food donated by a local Gurudwara and temples. Sources close to him insist that he had for some financial help from actors like Dharmendra, Akshay Kumar and Sonu Sood but failed to receive any response from them. Chopra was living in a rented house in Panchkula, Haryana.

The actor's grandmother was against his career in Bollywood and that compelled him to leave the industry. He was a post-graduate and after his brief stint in movies, he taught English in various schools and other institutions in Punjab. Shatrughan Sinha Remembers Veteran Actor Feroz Khan on His Death Anniversary.

We pray for his soul to rest in peace.

(The above story first appeared on LatestLY on Jun 14, 2020 01:19 PM IST. For more news and updates on politics, world, sports, entertainment and lifestyle, log on to our website latestly.com).