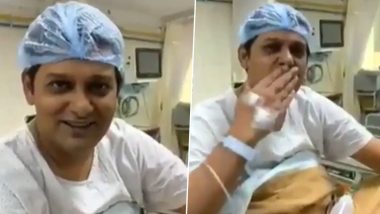 A video featuring Wajid Khan started trending on Monday, shortly after the singer-composers shocking death in the early hours the same day. The video, which went viral by afternoon, has Wajid singing the song "Hud Hud Dabangg" from his hospital bed. In the clip, the composer is unrecognisable, having shaved off his trademark beard. He tends to run short of breath after a point while singing at a stretch. Wajid Khan Passes Away, Salman Khan Condoles His Death And Says 'May Your Beautiful Soul Rest In Peace'.

Referring to his brother and professional partner Sajid, Wajid says in in Hindi, "Sajid bhai ke liye toh ek hi gana gaoonga main (I can only sing one song for Sajid bhai)" before he starts singing various versions of the popular "Dabangg" theme song with gusto.

A heart breaking old video of #wajidkhan . This is not a recent video. #rip

Talking about late Wajid Khan, singer Mamta Sharma who has sang multiple songs for the composer duo like "Anarkali Disco Chali", "Fevicol Se", "Pandeyji Seeti" and "Munna Badnaam Hua", told IANS: "Wajid Bhai would always feel his music. He never composed music just for the sake of composing it. He would always create music which he would feel deep inside. Most of the times he used live musicians, because he believed that live musicians bring life and soul in a song."

(The above story first appeared on LatestLY on Jun 01, 2020 10:54 PM IST. For more news and updates on politics, world, sports, entertainment and lifestyle, log on to our website latestly.com).