Bollywood in the year 2021 saw many celebrities making their debut in showbiz. From Ahan Shetty to Pranitha Subhash, check out who was yay and nay, as per their acting prowess. Read the full story. 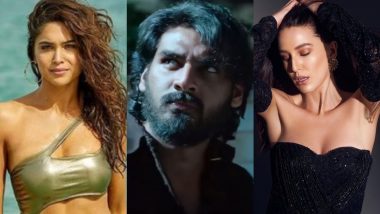 2021 has been a tough year for Bollywood because of the coronavirus. However, it was in the second half of the year when things started to get back to normal. Even though 2021 was a difficult phase for the industry, many new faces were introduced this year. Newbies tried their like luck on the silver screen and a few on the OTT platforms. From Suniel Shetty’s son Ahan Shetty, Pranita Subhash to Sharvani Wagh, Bollywood saw a pool of artists making their debut in the entertainment space. And as 2021 is almost coming to an end, we would like to rank the Bollywood debutants of 2021 based on their performances. So, let’s get started. Year Ender 2021: Mohanlal’s Drishyam 2, Salman Khan’s Radhe, Suriya’s Jai Bhim – Popular Actors’ Films That Released On OTT Platforms.

Making to the top of our list is Ahan Shetty, who made an aggressive yet starry debut with Milan Luthria’s film Tadap. The makers in the film try to hide his limitations with blood, romance, and beard, which actually has worked in the actor’s favour. As per his first movie, Ahan has done a decent job. Tadap is a Hindi remake of the 2018 Telugu film RX 100.

Sharvari made her acting debut in Bollywood with Yash Raj Films' Bunty Aur Babli 2 featuring Saif Ali Khan, Rani Mukerji, and Siddhant Chaturvedi. Even after starring alongside three terrific actors, Wagh created a lasting impression with her confident acting. She and Siddhant together rocked many scenes in the movie and brought coolness to the franchise.

In ZEE5’s Squad, Danny Denzongpa's son, Rinzing Denzongpa tries to go the desi Terminator or Commando way but fails miserably in his debut movie. With a predictable script, way too much patriotism, and bad action sequences, Rinzing’s Bollywood debut goes for a toss and how. The movie revolves around an abducted kid, who is the key to a cyborg mission. From Mohanlal’s Marakkar to Mammootty’s One, 7 Big-Ticket Malayalam Movies of 2021 That Left Us Sorely Disappointed (LatestLY Exclusive).

Up next, we have Malvika Raj, who entered Bollywood by playing the female lead opposite Rinzing Denzongpa in ZEE5’s Squad. She essays the role of Aria, a special agent in the movie, and tries to deliver a generic performance but gets pulled down by the film’s overall aura. In a nutshell, she would have done fantastic but is underwhelming to watch.

Katrina Kaif’s sister Isabelle Kaif made her B-town debut opposite Sooraj Pancholi in Time to Dance. She portrays the role of a dancer in the film. Talking about her acting, she is expressionless almost throughout the movie. Adding to the misery is the unexceptional storyline and blah dialogues. Verdict: It was miss for Isabelle.

After appearing in Kannada, Telugu and Tamil films, Pranitha Subhash made her acting debut with Bhuj: The Pride of India. In the movie, she plays the role of lead Ajay Devgn’s wife. However, the sad part is in the entire flick she doesn’t have a single dialogue. So, her debut goes into vain and we feel pity.

That’s it, guys! These are the six celebrities who made their debut in Bollywood in 2021. While some impressed, there were a few who still need to polish their skills to be called an actor we feel. However, overall, it was a learning experience for all these newbies. What do you think? Tell us your views in the comment section below.

(The above story first appeared on LatestLY on Dec 25, 2021 07:19 PM IST. For more news and updates on politics, world, sports, entertainment and lifestyle, log on to our website latestly.com).