In this year, we saw some of the biggest superstars' films premiering on OTT platforms and it was indeed a huge success. Some of the most popular releases of the year include Mohanlal’s Drishyam 2, Salman Khan’s Radhe, Suriya’s Jai Bhim among others. 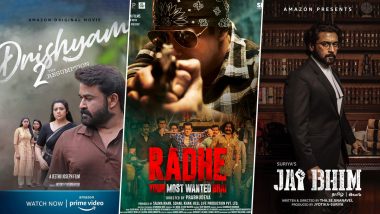 Ever since COVID-19 pandemic hit worldwide, the release patterns of films was seen taking an alternative route. An array of films, across industries, sought to OTT platforms. It was one of the biggest challenges for moviemakers, skipping theatrical releases and opting for streaming giants. But the results turned out to be fruitful. Movie buffs were entertained watching their favourite stars’ films on their television sets instead of the big screen. Although, some of the films really deserved to be released in cinema halls, however, the pandemic situation was and still continues to be a major concern. Year Ender 2021: From WandaVision, Squid Game to Hawkeye; Five Breakout Shows Of This Year That You Should Definitely Watch!

In this year, we saw some of the biggest superstars' films premiering on OTT platforms and it was indeed a huge success. Some of the most popular releases of the year include Mohanlal’s Drishyam 2, Salman Khan’s Radhe, Suriya’s Jai Bhim and many others were premiered on the popular streaming giants. As this year is almost coming to an end, let’s take a look at some of the popular actors and their films that released on OTT platforms in 2021.

Mohanlal, Meena starrer was a sequel to the 2013 released Malayalam film Drishyam and that was a blockbuster. Many anticipated that Drishyam 2 would manage to hit the big screens, but the makers had to opt out of their original plans and directly released it on Amazon Prime Video on February 19.

The Girl On The Train – Netflix

Parineeti Chopra’s film is based on author Paula Hawkins’ 2015 novel of the same name. It revolves around the life of Mira who is a troubled divorcee and an alcoholic. Her life becomes upside down when she gets entangled in a murder investigation. The film was initially scheduled to be released in May 2020, but due to the pandemic, it was shifted to February 26 this year.

Abhishek Bachchan was seen playing the titular role in the film helmed by Kookie Gulati. The film based on the life of Harshad Mehta, the infamous stockbroker who was involved in financial crimes, was released on April 8.

Salman Khan’s Eid releases have always been a huge one and fans’ expectation were sky-high about this action-thriller too. It was originally planned to be released in theatres in May 2020, but had to be postponed due to the coronavirus situation. It was finally released on May 13 ‘as premium video on demand on Zee Plex through ZEE5’ and also managed to have theatrical releases overseas.

Dhanush’s films have always been a treat for the audience. Fans have always loved to watch his swag on the big screen. However, that didn’t happen with the Karthik Subbaraj directorial as it had to be premiered on the streaming giant. The film was dubbed and released in 17 languages on June 18.

Vidya Balan is one of the finest actresses in the industry and her film Sherni based on the importance of wildlife conservation directly got OTT release. This unusual genre released on June 18 was hailed for the lead actress’ performance and the intriguing narrative.

The crime-thriller featured Prithviraj Sukumaran in the role of ACP M Sathyajith IPS and Aditi Balan as a freelance journalist named Medha. The makers had initially planned to release the film in theatres when it was permitted to function with 50% capacity. But as the second wave hit the country and functioning of cinema halls were affected, the team decided to release Cold Case on OTT. It was made available on June 29 midnight.

An impressive political-thriller written and directed by Mahesh Narayanan. The film premiered on July 15 was hailed for the exceptional screenplay and was also labelled as lead actor Fahad Faasil’s career best performance.

Farhan Akhtar’s physical transformation for Rakeysh Omprakash Mehra’s film had left movie buffs amazed already and one just couldn’t wait for the film to be released. The theatrical release was indefinitely delayed due to the pandemic and it finally made it to the OTT platform on July 16.

OTT platforms saw some extraordinary content in this year and Pa Ranjith’s film starring Arya in the lead was another proof. The film that revolved around 1970s boxing culture and the politics being involved in it with Arya playing the lead role, released on July 22. It turned out to be the ‘second most watched regional film’ on Amazon Prime.

The OTT giant revealed that Shershaah, which released on August 12, had become the ‘most watched Indian film on the platform’. Starring Sidharth Malhotra in the lead as Captain Vikram Batra, the film showcased the life of Param Vir Chakra-awardee Captain, his posting in the army and his battle during the Kargil War.

Set during the Indo-Pakistani War of 1971, the Abhishek Dudhaiya directorial starred Ajay Devgn as IAF Squadron Leader Vijay Karnik. The film was slated to be released in theatres last year during the Independence Day weekend, however, the theatrical release was cancelled and it streamed on the OTT platform on August 13 this year.

Nayanthara is known as the Lady Superstar of South Cinema and fans look forward to watch her films in theatres. However, Milind Rau’s crime-thriller got a direct OTT release on August 13.

Although Rojin Thomas’ film did not feature the biggies of Mollywood, it was a simple, realistic story that released on August 19 and won audiences hearts. Starring Indrans and Sreenath Bhasi in the lead, the tale was about a technologically challenged father who tries to reconnect to his son who is immersed in the world of technology.

Nani’s film was planned to be released in theatres but the decision was put on hold as the second wave of COVID-19 hit the country. They planned to release in theatres after it reopens, but decided to premiere on the OTT platform on September 10 after the exhibitors disapproved the regulations of ticket prices that was imposed by the state’s CM YS Jagan Mohan Reddy.

Amid the range of serious contents, there were a few light-hearted comedy films too that made it to the OTT platform and one among them was Saif Ali Khan, Arjun Kapoor, Jacqueline Fernandez, Yami Gautam starrer. The horror-comedy premiered on September 10.

Vicky Kaushal’s film based on the life of freedom fighter from Punjab, Udham Singh, was released on the OTT platform after several delays. It premiered on October 16 and received widespread critical acclaim. In fact, it was also shortlisted for the Indian submissions for Best International Feature Films category at the 94th Oscars, but couldn’t make it.

Suriya’s legal drama released on November 2 was based on a case fought by advocate K Chandru in the early 90s. Post release, it did run into controversies for allegedly insulting the Vanniyar Sangam.  This film currently tops the list on IMDb.

Kartik Aaryan ditched his charming boy-next-door image and was seen as a journalist named Arjun Pathak in this film that released on November 19. Remake of the Korean film The Terror Live, Kartik’s performance in the Hindi version was lauded by critics.

Starring Vinay Forrt, Chemban Vinod Jose, Jaffar Idukki, Joju George, this was another film that released on November 19 as well. This Malayalam film was about two cops who head out in search of a criminal and get stuck in a village of Churuli.

Sujoy Ghosh’s daughter Diya Annapurna Ghosh made her directorial debut with Abhishek Bachchan as her film’s lead actor in Bob Biswas. The crime-thriller released on December 3 is a spin-off to the 2012 released film Kahaani.

Well, these are some of the films of the popular actors in the Indian film industry that made to the OTT platforms. In these most difficult times, the filmmakers, actors and producers and all others involved in filmmaking, ensured that the audience is entertained and yes, they served us all with wonderful content in this year.

(The above story first appeared on LatestLY on Dec 22, 2021 07:00 PM IST. For more news and updates on politics, world, sports, entertainment and lifestyle, log on to our website latestly.com).