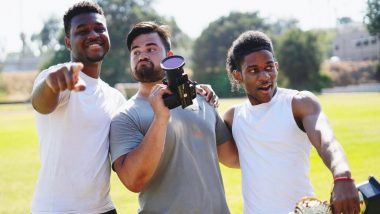 Wednesday June 30th, 2021 is the date the cast & crew of Envy officially finished filming their movie. It is the end of an era for them filming this masterpiece from February 27th, 2021-June 30th, 2021. They started rehearsals in January, so they have been going at this project for a long 4-5 month time period. Here is Niko Gunn, Elijah Garcia, and Darrell Battle doing their victory poses for the completion of the filming of Envy. By the looks of it, they are having a blast and an amazing fun time on their last day on set of Envy. The cast & crew began filming their last day on set since 5AM and they finished around 4:30pm. They filmed their first session of scenes in Corona, CA and filmed their second session in Pasadena, CA. This day was the time for the extras in the movie to shine. The long hours, blood, sweat, tears, patience, and time they have put into this film finally paid off. It was a very emotional rollercoaster to finish filming this movie due to various reasons: reschedules, reshoots, delays, and etc.

What is next for upcoming actor stars Niko Gunn & Darrell Battle? Will they cross paths again in the future ? Will there be an Envy sequel ? The questions will be answered soon enough. Niko Gunn is looking forward to being casted lead roles in Netflix projects and is currently chasing movie stardom. He desires to be in Marvel superhero movies in the future because his childhood idol has always been Spider-Man and he still to this day wants to be just like his role model on the big screen. You will definitely see Niko in more movies and TV shows because his acting skills are incredible, astonishing, and top notch in Envy, and is a must-see. He officially began his acting career in 2019 with short films and needs to be in more projects.

All American actor, Darrell Battle is on the rise to stardom as well and he is looking to get casted in big roles in movies and on Netflix as well. DJ’s performance in this movie is so amazing and will catch the attention of the audience. The delivery and tone in his acting is spectacular and everyone needs to see him perform as well. Moreover, what are the plans of filmmaker Elijah Garcia for the future? What other projects and collaborations does Garcia have stored for us? Elijah Garcia had the vision of Envy since 2020 and his dreams finally manifested itself by completing his vision on screen and it successfully came true. Envy is a modern day story about biblical figures, Cain and Able. It is dark, gritty, and worth the watch when it comes out on Amazon Prime. Niko Gunn is Able; the sarcastic, talented, good-looking younger brother with a handsome smile who is a sophomore track star in high school.

While his counterpart, Darrel Battle is Cain; the evil, slick, conniving, and jealous older brother who is a non-talented senior track athlete who desires more attention and is constantly neglected by everyone he knows and loves. The cast & crew are in negotiations with publishing Envy on Netflix after it is released on Amazon Prime Video. So make sure you guys tune into see what they have been working on. AND THAT IS A WRAP !!!