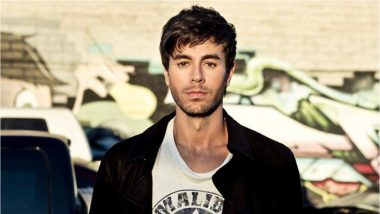 Enrique Iglesias turns 45 today. As he celebrates his birthday, we have to thank him for some of the best pop songs ever. His songs, some of them over a decade old, still bang. You can play his tracks on a loop and it is the best quarantine playlist you could have asked for. While, we'd totally call Enrique a natural and a gifted artist, the Latin pop star doesn't think so. Enrique Iglesias Shares Adorable Video of Daddy-daughter Dance on 'We Are Young'.

"There's always some artists who don't need to fight, that get immediately played on top 40 no matter what - you know you have a guaranteed top 20 hit," he said in an interview. "I got to fight like it's my first record every time."

Well, fought for, or natural, whatever the case may be, we will be thankful to Enrique for these 6 awesome numbers. Enrique Iglesias, Anna Kournikova Share Adorable Pictures of their New Born Baby Girl (View Pics).

The top comment on this YouTube video is "Even if you're single since birth this song can make you remember your ex" And that perfectly sums up the song. This emotional number can move stones.

Enrique's biggest hit to date. The song was one of the first songs to be played in New York after the attacks of 9/11.

The song featured in the Will Smith movie, Wild Wild West. But once the music video popped up on TV screens featuring Enrique and his sheer hotness, there was no looking back. The world was his fan.

This song might not have many takers, but we love it. The beats undeniably groovy and the lyrics are racy.

This was the second single from Enrique's English debut. The energetic number was quite passionately sung.

Love To See You Cry

The lyrics might be best described as abstract, but the melody can still get to your heart. The lack of a definition to the lyrics an edge of mystery.

A very happy birthday, Enrique Iglesias. We can't wait to hear more of his syrupy voice. Thanks for all the entertainment.

(The above story first appeared on LatestLY on May 08, 2020 09:40 AM IST. For more news and updates on politics, world, sports, entertainment and lifestyle, log on to our website latestly.com).