Thank you, Kevin Feige, Russo brothers, RDJ and all for making our generation so special and lucky! 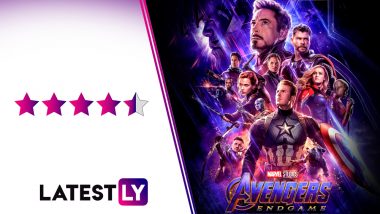 'We are in the End Game now', Doctor Strange's (Benedict Cumberbatch) words to Tony Stark/Iron Man (Robert Downey Jr) rings hard in our minds as the opening scene plays out. Avengers: EndGame is the darkest movie in the entire Marvel Cinematic Universe, also its most emotionally wrenching. There are big moments of tragedy too, and it is these moments which is what makes EndGame so freaking beautiful as an experience. If you, like me, have been with MCU since 2008's Iron Man and have etched your knowledge with its lore, then Avengers: EndGame is a richly rewarding fan-service for you! Avengers EndGame Box Office: 7 Records We Expect the Marvel Superhero Film to Break in India.

You know how things ended in Avengers: Infinity War. Thanos (Josh Brolin) gets all the Infinity Stones and snaps half the universe out of existence. The rest of the living universe is left to build up their lives on the sorrowful memories of their departed ones. It is, however, the surviving superheroes from Infinity War, who are suffering the most. They see this Snap-o-calypse their failure and responsibility. With Captain Marvel (Brie Larson) in tow and the return of Hawkeye (Jeremy Renner) and Ant-Man (Paul Rudd), they set to figure out how to reverse the snap and bring back their dead comrades. (Avoiding spoilers to the best of my ability here...)

When it comes to Marvel Cinematic Universe, I am sorry but I am unable to keep the fanboy and the critic separate. It may form as bias but also think this way - if Avengers: EndGame turns out to be an underwhelming experience, then the fanboys are the ones who get the most disappointed. With so much riding on this film and so much loose ends to be tied up, Avengers: EndGame has 14,000,605 ways to screw it up. The fact that it only ends up with just a few minor niggles makes this film a cinematic milestone that deserves to be praised for generations.

Do you think you have figured out what's going to happen here? Let me say, that you might have worked out certain parts of it. I did. And then, I didn't. The trailers mostly show moments from the first act, so the rest of the film is one big, thumping surprise. Screenwriters (and the unsung heroes of MCU)  Christopher Markus and Stephen McFeely have written a complicated narrative that infuses elements from the past movies to deliver a film that is both astounding and at the same time, nostalgic. Along with the directors, they have also taken some very bold choices with certain characters, especially with Thor (Chris Hemsworth), Bruce Banner (Mark Ruffalo) and Captain Marvel.

Avengers: EndGame also rectifies some of the mistakes MCU has done in the past, especially in Infinity War. Hawkeye and Ant-Man who were absent from IW get to do a lot more here. Cap (Chris Evans) and Black Widow (Scarlett Johannson) who felt sidelined get to create maximum impact here. If you thought Infinity War put too much of a sympathy light on Thanos, then EndGame shows us more of the psychopathic side of his. Every character present here serves their purpose, but Avengers: EndGame relies on the original Avengers (Iron Man, Cap, Black Widow, Hawkeye, the Hulk and Thor) to deliver the best goods. Which is why, EndGame works so well to those who have been with the franchise from the start.

The pacing might be a problem with Avengers: EndGame, as a lot has been talked about its three-hour runtime. I admit certain portions, especially in the first act, had some lag. Which is more so because these scenes lacked action that you expect in a usual superhero film. Infinity War was about moving from one thrilling setpiece to another. EndGame is more about developing characters and their sense of purpose, and these scenes actually build towards that. Avengers EndGame Box Office: Can the Marvel Film Make a Billion Dollars Over Its First Weekend? Not Impossible, It Seems!

But once the Avengers, err... Assemble for their ultimate mission, the movie picks up the pace and offers you lovely surprises in the form of callbacks, cameos and many fan-service moments. Some of the elements about using a certain plot-device to change things feel OTT and are difficult to grasp (which makes EndGame worth a watch again). Also, if you are an MCU first-timer (aka Amitabh Bachchan), then I am pretty sure that you will have no clue why the person next to you is gasping over a small scene or a random character appearance. Avengers: EndGame is for the fans, through and through, and it doesn't care if others are having trouble figuring things out.

It is also MCU's most serious movie, toning down the humour (not completely absent, though, and sometimes jarring too) and letting the seriousness of the situation take priority. There are a couple of affecting deaths and a few final farewells. But then, there are plenty of fun moments too, mostly about unexpected characters meeting each other.

Avengers: EndGame may be about character development and callbacks, but the Russo Brothers don't deprive you of the thrills and action. They make the climactic fight into one big-payoff for your patience, by delivering the biggest spectacular action-setpiece of the century. It is a montage of fan-servicing moments, giving you enough to cheer, letting you grasp your hearts and then let you shed several drops of tears. I teared up, and I am not ashamed to admit it. The CGI has also improved a lot.

The performances are terrific, with every actor putting their best foot forward. However, the movie belongs to the first leads of MCU - Robert Downey Jr, Chris Evans, Scarlett Johannson, Mark Ruffalo, Chris Hemsworth and Jeremy Renner. They all deliver such brilliant performances that it is difficult to pick out the one that stands out. And yet, I have to say that RDJ, Evans and Johannson leave a bigger impact than the rest.

Avengers: EndGame, ultimately, belongs to Anthony and Joe Russo for shattering every damn apprehension we had and delivering a juggernaut of a movie. Hats off, sires! It may not appeal to a few, but for a Marvel fanboy, Avengers: EndGame is a brilliant, heart-tugging and ultimately, an exhilarating reward for being there through the journey of MCU.

- Not for those who haven't followed MCU strongly

- A Couple of Funny Scenes Jar

Avengers: EndGame is among the finest when it comes to blockbuster cinema, and not just for superhero movies. It is filled with enough fan-love, surprises and emotional moments, that harpoons your heart to the memories of the experience, perhaps forever. Marvel Cinematic Universe will continue, but Avengers: EndGame is a beautiful, brilliant culmination to a journey that we all have been a part of! Thank you, Kevin Feige, Russo brothers, RDJ and all in MCU for making our generation so special and lucky!

(The above story first appeared on LatestLY on Apr 26, 2019 12:19 AM IST. For more news and updates on politics, world, sports, entertainment and lifestyle, log on to our website latestly.com).