Recently, during a fan interaction on Twitter, Dave Bautista revealed how that scene came about in fruition. 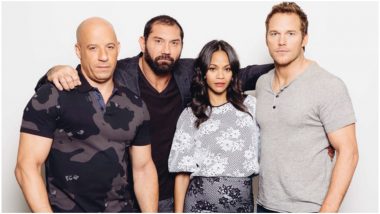 While Avengers Infinity War ended on a solemn note, it wasn't all serious. As is the tradition with most of the Marvel Cinematic Universe movies, Infinity War, directed by Anthony and Joe Russo, had been peppered with funny scenes. One of the funnier ones is the scene where Drax, played by Dave Bautista, acts as if he is invisible when Star-Lord (Chris Pratt) and Gamora (Zoe Saldana) see him standing there, as they kiss. The best part about the whole sequence is that Drax actually thinks that being still makes him invisible and it is only when Mantis (Pom Klementieff) greets him that his bubble gets burst. Avengers 4: Dave Bautista Drops a HUGE Spoiler About Guardians of the Galaxy; Wonder What Disney Has to Say About This!

Recently, during a fan interaction on Twitter, Dave Bautista revealed how that scene came about in fruition. He actually thanks Vin Diesel, who voices Groot, for that scene. Dave tweets, "In an celebratory way brought to my attention for the first time by my homie Vin Diesel who has supported me since very early in my acting career." Avengers: Endgame, Captain Marvel, Shazam! - 9 Superhero Movies We Are Super-Excited To Watch in 2019!

In an celebratory way brought to my attention for the first time by my homie Vin Diesel who has supported me since very early in my acting career. https://t.co/DHEdShRrRx

The former WWE star, who will be seen in Avengers EndGame, may owe it to Marvel for his acting career success, thanks to Drax being such a hit with the audience with the Guardians of the Galaxy series. However, Dave is still seething with the Marvel-Disney studios for ousting GOTG director James Gunn (who, incidentally, had written the above scene) over his past tweets, where the director had made jokes on paedophilia. Are Disney and Marvel Rehiring James Gunn to Direct Guardians of the Galaxy Vol 3? Here's The Truth!

While the others stars on the franchise took a rather quiet stance on the issue, Bautista was very vocal of his dissent against the decision. He even said that he is not interested in working with the franchise anymore unless Gunn is rehired. However, he is contracted to appear in Avengers Endgame, following which his future with Marvel, and even Disney, is in the dark. Avengers Endgame will release in India on April 26.

(The above story first appeared on LatestLY on Jan 02, 2019 01:45 PM IST. For more news and updates on politics, world, sports, entertainment and lifestyle, log on to our website latestly.com).