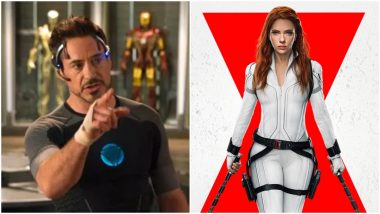 Black Widow, Marvel Cinematic Universe's first feature-length movie in Phase 4, has finally dodged a series of delays to arrive in theatres and on Disney+ Premier access. Not in India, though, as the movie awaits a theatrical release here, which is most likely to happen in October. Directed by Cate Shortland, Black Widow marks the first solo outing for Scarlett Johansson as the titular superhero in MCU, even though her character died in Avengers: Endgame. (SPOILERS AHEAD) Black Widow Release in India: Scarlett Johansson’s MCU Film Will NOT be Available on Disney+ Hotstar on July 9 - Here's Why.

The movie is set between the events of Captain America: Civil War and Avengers: Infinity War, when Natasha Romanoff aka Black Widow was on the run from the US Government.

So since it happens at a time when Tony Stark didn't die, there were huge speculations that Robert Downey Jr would make a cameo in the film. Since Black Widow's last scene in Civil War was with Tony, rumours were rife that Black Widow would continue from there.

Alas, going by the reports of those who has seen the film, Black Widow is not having a cameo from Robert Downey Jr. In fact, after the film premiered in theatres, any mention of the actor from the cast of the movie has been removed, from the IMDb and Wiki pages of Black Widow. However, Natasha's old-time compatriot Clint Barton aka Hawkeye finds himself a reference in the movie.

While it would be disappointing for fans of both RDJ and his character, the latter also dying in Avengers: Endgame, it makes sense for him not to return for one final time, and thus ruin his poignant demise from his last film. As for Black Widow, she deserved a film of her own for a long time, and we are more annoyed that it came after she was killed in the MCU biggie.

Black Widow also stars Florence Pugh, David Harbour, O-T Fagbenle, Olga Kurylenko, William Hurt, Ray Winstone, and Rachel Weisz. It will be followed by Eternals, Shang-Chi and The Legend of the Ten Rings and Spider-Man: No Way Home later this year as part of MCU's Phase 4.

(The above story first appeared on LatestLY on Jul 09, 2021 05:57 PM IST. For more news and updates on politics, world, sports, entertainment and lifestyle, log on to our website latestly.com).