Black Widow Release in India: Scarlett Johansson’s MCU Film Will NOT be Available on Disney+ Hotstar on July 9 - Here's Why

Black Widow has Johansson reprising her role as Natasha/Black Widow, Florence Pugh is starring as Yelena, David Harbour portrays Alexei/The Red Guardian, and Rachel Weisz will be Melina. The movie is helmed by Cate Shortland and produced by Kevin Feige. 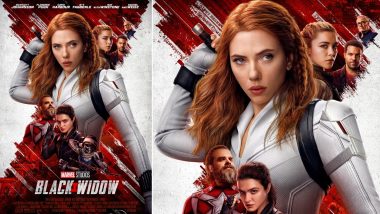 While Scarlett Johansson's fans in India were excited to see the actress in MCU's Black Widow, they will have to wait a little longer. The film which premiered on Disney+ worldwide today (July 9), is not available for the audience in India to watch it online. The film is available on Disney+ under its Premiere Access section for $30 on the same date in the US but it looks like the movie might take months to release in India on Disney+ Hotstar. Black Widow Star Scarlett Johansson to Star In and Produce ‘Tower of Terror’ Movie Based on Disney’s Theme Park Ride.

While other MCU projects have been released at the same time in India as the world, the exception has been made for Black Widow considering that the theatres are shut in the country. The makers want to release the film in theatres on October 8 and hence made the decision of not making the film available on the OTT platform as well. Not just that, the Disney+ Premiere access service is also not available in India, so the audience will have to wait for a couple of months more. Considering that all the Premiere Access films are made free in a matter of a few months of their release, Indian viewers will be able to watch the film around that time.

Take A Look At Its Trailer Below:

Scarlett Johansson recently expressed her 'bittersweet' emotions as she said goodbye to her role as Black Widow. The actor appeared in an interview on the Good Morning America show, where she revealed that she will no longer play her Marvel character after the release of Black Widow, reported People magazine. "I've had an incredible decade working with my Marvel family. I'm going to miss not seeing them every 18 months or two years, like that kind of milestones I always really look forward to," Johansson had said during the interview.

She added, "But I feel really proud of this film and I think it's great to go out on a high note. This movie is so different from any other Marvel film that we've done so far, so yeah... like I said, it's bittersweet." The actor, who played Natasha Romanoff in the much-loved Marvel movie, was first introduced as Black Widow in the 2010's 'Iron Man 2' and the last time she reprised her role was in 2019's 'Avengers: Endgame' where her character died. Black Widow Early Reactions: Scarlett Johansson and Florence Pugh’s Solid.

Black Widow has Johansson reprising her role as Natasha/Black Widow, Florence Pugh is starring as Yelena, David Harbour portrays Alexei/The Red Guardian, and Rachel Weisz will be Melina. The movie is helmed by Cate Shortland and produced by Kevin Feige.

(The above story first appeared on LatestLY on Jul 09, 2021 12:45 PM IST. For more news and updates on politics, world, sports, entertainment and lifestyle, log on to our website latestly.com).