On the birthday of this eccentric, melodious, brilliant singer-song writer Britney Spears, we have put together a list of five of her songs that make us relive past. 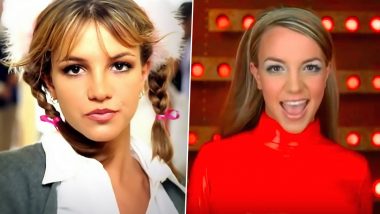 Britney Spears's historic two decades and more presence in the international music space has been riddled with not just melody but controversies as well. She was in fact the favourite sounding board for the press and it's not entirely their fault. But on her birthday today, we would rather talk about the woman who has managed to create mass hysteria with her eccentric music presentations. She stormed the music scene in 1998 with Baby One More Time and nothing has been the same in the American pop scene.  Paris Hilton Comes In Supports Of Friend Britney Spears Amid Free Britney Movement, Says ‘Its Not Fair That She Has No Control of Her Life’

Spears is catchy, bold, sexy, confident, and absolutely fantastic. We have some of her best songs right here for you on her birthday today.

Her debut single was one of her popular songs. It was such a fun song to listen and an extremely fab video to watch. It just changed the way pop music was viewed then.

Right now this song is popular in India as a bit of its arrangement sounds like a music piece from Ekk Duje Ke Liye. But when Toxic released it was a rage. It had earned Spears a Grammy in dance production and we feel it was apt. More than the song, it's presentation had enamoured people for years.

Oops! I did it again

Who doesn't know this song? Even the ones who aren't an American music aficionado must have watched and liked it. This was kinda addictive. The space-age music video definitely is the best we had seen at that time and that's why when we remember this song, we remember everything about it. Not just the track. Our favourite? 'I am NOT THAT innocent.'

A song from the same album as above, Lucky is sweet pop blended with a lot of melodrama which makes it a fan favourite

She also co-wrote this track which is seen as Spears' answer to her ex Justin Timberlake's Cry Me A River track that apparently was based on their relationship. Everytime hits you deep as a rendition of loss and loneliness.

We are pretty sure there are many more melodies of the Pop Princess of the 90s and 2000s but these are our best picks. Do tell us yours.

(The above story first appeared on LatestLY on Dec 02, 2020 09:20 AM IST. For more news and updates on politics, world, sports, entertainment and lifestyle, log on to our website latestly.com).