Chadwick Boseman No More: From Black Panther 2's Release Date to Its Current Status, All You Need to Know About The Upcoming Superhero Film

Plans for a sequel were in place with a tentative May 22 release. But, reports about the actor passing on the mantle of Black Panther had surfaced about a year ago. There was a report by We Got This Covered that said T'Challa's sister, Shuri, played by Letitia Wright, might be the next Black Panther. 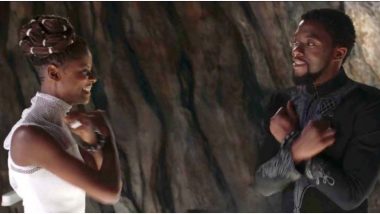 Chadwick Boseman has died at the age of 43 due to cancer. The actor shot to global fame as he played the superhero Black Panther in the MCU movies. He has appeared as the King of Wakanda in four films, including one standalone feature that shattered box-office records. Plans for a sequel were in place with a tentative May 22 release. But, reports about the actor passing on the mantle of Black Panther had surfaced about a year ago. There was a report by We Got This Covered that said T'Challa's sister, Shuri, played by Letitia Wright, might be the next Black Panther. Chadwick Boseman No More: Let's Remember the Black Panther Actor By Listening to Kendrick Lamar, The Weeknd's 'Pray for Me' Song on Loop (Watch Video).

Black Panther producer Nate Moore had also dropped a hint that the mantle of the superhero will be passed on. "One thing I like to tell Ryan [Director] is, the Black Panther is a mantle as much as it is a person, so we’re not restricted by anything, because the truth is, there’s a lot of different ways to go back to Wakanda and have a good time and continue to explore the themes that made the first film so resonant."

In 2018, Ryan Coogler, writer and director of the Black Panther movies, had said that there is a "lot of pressure" for the sequel. Chadwick Boseman Dies At 43; Inspiring Quotes by Black Panther Actor Will Give You a Beautiful Perspective About Leading Life.

As per the comics, Shuri does become the ruler of Wakanda, a fact that Letitia Wright pointed out during a Q&A with fans. After the release of Avengers Infinity War, the actress was asked by comicbook.com about taking Black Panther duties.

But, she could simply be have been concealing the ending of the then-upcoming sequel, Avengers: Endgame.

As per early reports, Chadwick Boseman had inked a 5 picture deal with Disney. Out of that, he has already appeared in four - Captain America: Civil War, Black Panther, Avengers: Infinity War, Avengers: Endgame. But this deal was signed years before Boseman's diagnosis.

Black Panther 2 is currently in development. Plans to begin the principal photography in early 2021 were in place.

As per 2018 reports, the studio was in talks with Michael B Jordan and Donald Grover to join the cast of Black Panther 2. Although it was never specified what character they were being approached for.

It is heartbreaking that Chadwick Boseman is no more with us. He has entertained millions of people with his turn as Black Panther. There will be on one like him ever again. Chadwick Forever.

(The above story first appeared on LatestLY on Aug 29, 2020 11:55 AM IST. For more news and updates on politics, world, sports, entertainment and lifestyle, log on to our website latestly.com).