Chris Pratt Birthday: 5 Best Moments of the Actor as Star-Lord in the MCU 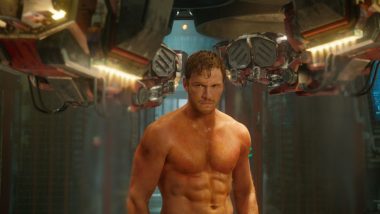 Chris Pratt turns 41 today. The fans of the actor have been in love with him since his days on Parks and Recreation. If Andy from the sitcom is not the nicest, goofiest boyfriend ever then who is. But the actor's star status propelled after he starred in Guardians of the Galaxy as Star-Lord. The actor plays the role of the superhero, alter-ego of Peter Quill, in the MCU. He continues to be a loveable, goofy person here as well. A perfect casting keeping in mind how jovial Pratt is in real life. Chris Pratt Goes Into Panic Mode on His Insta Story As He Accidentally Deletes 51K Emails and Fans Call It a 'Peter Quill-Type Mistake' (Watch Video).

With the success of Guardians, Chris also got a chance to star in films like Passengers and Jurassic World. The actor will continue to play the role of Star-Lord in the upcoming MCU films. GOTG 3 will be directed by James Gunn, who was briefly fired from Disney.

Today, on Chris' birthday, we are going to look at some of his best moments at Star-Lord in the MCU. Katherine Schwarzenegger Says Hubby Chris Pratt Is Very Understanding and Caring During Her Pregnancy.

When Star-Lord meets Thor for the first time, in Avengers: Infinity War, he deepens his voice, to appear more macho. But he only becomes a laughing stock in this bid.

In the climax of Guardians of the Galaxy, Star-Lord engages in a dance-off with the antagonist, Ronan, during the Battle of Xandar. He is only distracting Ronan while Rocket and Drax shoot him to get the infinity stone. Chris' comic timing is incredible in the scene, which soon turns very serious with the Guardians of the Galaxy yielding the infinity stone.

In Infinity War, Tony Stark and Star-Lord have to work together to defeat Thanos. But they can't make a plan with Peter constantly being annoying. Drax even suggests that they do the dance-off again.

Yondu had raised Peter, although after kidnapping him. Yondu was a father figure to him and continued to be until his death. Yondu died trying to save Quill at the end of GOTG Vol 2. We get to see one of the saddest deaths in the MCU and one of the best scenes of Pratt.

Dancing is a big part of Peter Quill. The romantic scene in GOTG 2 on Ego's "planet" turns saddening soon. Peter and Gamora dance, but soon she breaks it off to accuse his father of being manipulating.

And to think that Chris Pratt was almost not the Star-Lord we needed. Casting director, Sarah Finn, has revealed that the actor refused to audition for the role, which ticked off director James Gunn. Later, when Chris was ready, James did not want to audition him. It was tough for Sarah to bring both men together in the same room. When she finally did, it was a Eureka moment. "It was honestly one of those eureka moments that we talk about in casting when it absolutely feels right and you know it’s right. James turned to me within 10 seconds and said, 'He’s the guy.'" Sarah said in an interview.

(The above story first appeared on LatestLY on Jun 21, 2020 11:45 AM IST. For more news and updates on politics, world, sports, entertainment and lifestyle, log on to our website latestly.com).