Dev Patel Birthday Special: Five Roles Of The Actor That Prove He Is A Versatile Performer

Dev Patel celebrates his 30th birthday today and so we thought of revisiting some of his roles that made us his biggest fans. 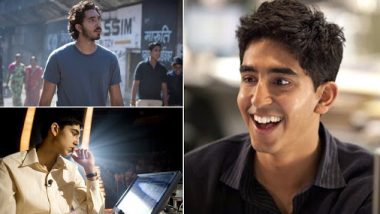 Dev Patel is still the Slumdog Millionaire boy and I don't mean that in a condescending way. That film made us familiar with this young burst of talent who is an Indian origin British actor. While we doted on his accent (every woman has a thing for British accent), we were supremely impressed by his boyish charm and good acting skills. He went on to do some really amazing characters in his movies. Did you know his first acting stint began with Skins where is character was developed especially on him? After he was signed, the writers of the British comedy shaped his character modeled on his personality. Guess they could see the spark in that teenager. Anupam Kher, Dev Patel’s ‘Hotel Mumbai’ Dialogues Are Based on Real Phone Transcripts of 26/11

Today on his birthday, let us tell you about my five favourite roles of Dev Patel. I am pretty sure the list will surprise a few.

Slumdog Millionaire was his breakout film, a movie that introduced us to this rare talent making waves in Hollywood. Patel brought in a sense of vulnerability in Jamal's persona which caught everyone's attention instantly.

I know many would be livid to see this selection here but hear me out. Patel played villain Prince Zuko and that's admirable as it came right after Slumdog Millionaire where he was extremely likeable. This contrast in two characters back to back proves Patel has skills that just need a good director.

This series was quite interesting and affable. So many veteran actors in one film made it a pleasant watch and Dev's hyperactive and babbling Sonny became the only agreeable chaos in this calm. He was the perfect foil for the film which needed some upbeat charisma.

Dev Patel as Neel Sampat in this TV show was by far my best character of his. He was eloquent, efficient, and yet a much reticent character. He keeps it to the point and sharp...amazing calibre.

Based on a true story, Dev played Saroo Brierley and impressively portrayed the turmoil of a man going to any lengths to reunite with his birth mother. The look on his face when sees his house and his mother...brilliant!

(The above story first appeared on LatestLY on Apr 23, 2020 09:20 AM IST. For more news and updates on politics, world, sports, entertainment and lifestyle, log on to our website latestly.com).