Did Taylor Swift Drop the Name of Ryan Reynolds and Blake Lively's Third Baby in Her Song 'Betty'? Twitterati Believe So!

While some are calling it the new gay anthem, there are others who have also managed to point out something rather interesting about it. It seems the Swift has dropped the name of Blake Lively and Ryan Reynold's third child in it. 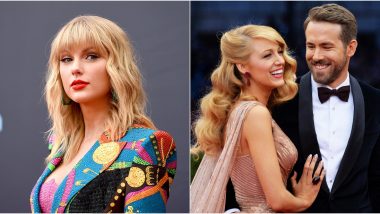 Taylor Swift just made everyone's coronavirus quarantine better as she dropped her new album Folklore recently. Fans of Swift have been going crazy over it. Every Taylor Swift song comes with its own easter eggs and now everyone is trying to decipher the hints that the singer has dropped with her new tracks. One of the most popular tracks from the album has turned out to be "Betty". While some are calling it the new gay anthem, there are others who have also managed to point out something rather interesting about it. It seems the Swift has dropped the name of Blake Lively and Ryan Reynold's third child in it. Ryan Reynolds and Blake Lively Share the First Picture of Their Third Baby But We Can't Decide Who Their Daughter Resembles More!

While the song is about someone singing about mistreating a girl named Betty and two other names mentioned in the track are Inez and James, fans have managed to connect it to Ryan and Blake's children. The couple have a five-year-old daughter named James and a three-year-old daughter named Inez. Last year, the couple became parents again but never made an official announcement about the same and hence their third daughter's name has been a mystery. Fans are now thinking that Ryan and Blake have named their third daughter Betty.

This won't be the first time that Taylor's song has a connection to Reynold's children Remember back in in 2017, Swift had confirmed that the beginning of Swift’s song ‘Gorgeous’ from her Reputation album were that of Ryan and Blake's oldest daughter James. Fans have been crazy about this easter egg and here are some reactions to it. Taylor Swift Treats Fans with Her New Album ‘Folklore’.

Mind Blown by This!

James and Inez are the names of Blake and Ryan Reynolds daughters. 🤯🤯🤯🤯🤯🤯🤯 #betty

So this proves James is a girls name. pic.twitter.com/mItwIkzJPk

Inez??? James??? What if Betty is the name of Blake Livelys third kid

Well, let's see if Ryan and Blake confirm that the Swift song indeed does reveal their third daughter's name. Until, then we'll be happy to look for more clues in Swift's songs.

(The above story first appeared on LatestLY on Jul 24, 2020 03:46 PM IST. For more news and updates on politics, world, sports, entertainment and lifestyle, log on to our website latestly.com).