The film centres around two low-level astronomers who embark on a media tour to warn humankind of an approaching asteroid that will destroy the planet and critics seem to enjoy the emotionally humorous plot of the film. 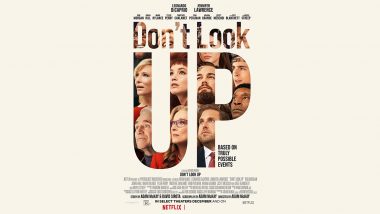 When names like Meryl Streep, Leonardo DiCaprio, Timothee Chalamet and Jennifer Lawrence are attached to a film, it is already established that a film will be good. The ensemble collaborated together for Adam McKay directorial Don't Look Up, which will premiere in theatres on December 10 and on Netflix on December 24. The film already had quite a build-up for itself, courtesy of the amazing posters and promos shared by the makers of the film, but it looks like the film has lived up to these expectations (with some exceptions, of course). Don’t Look Up First Reviews: Leonardo DiCaprio, Jennifer Lawrence, Meryl Streep’s Film Declared Oscar Worthy.

The film centres around two low-level astronomers who embark on a media tour to warn humankind of an approaching asteroid that will destroy the planet and critics seem to enjoy the emotionally humorous plot of the film. Tagging it as an 'emotional ride', the reviewers have given a big thumbs up to Meryl Streep, Leonardo DiCaprio, Timothee Chalamet and Jennifer Lawrence's film.

Here's What The Critics Have To Say About The Film:

Verve: "The journey Don’t Look Up takes viewers on is mesmerizing. I went from laughing at the absurdity of a military general scamming some astronomers out of $20 to being genuinely mad at everyone not only ignoring the obvious but, in some cases, rooting for the damn comet. Toward the end, when the collision becomes impossible to ignore, I just felt bad for everyone involved. Don’t Look Up has a largely dismal outlook on humanity, but it ends on a surprisingly hopeful note. (You should definitely stick around for the credits where it wraps back around to being hilarious.)"

The Guardian: "Don’t Look Up finally upshifts into a mode of exaltation and transcendence, and I couldn’t help thinking of Lars von Trier’s 2011 planet-collision film Melancholia, which is similar. But for all its faults, Von Trier’s film chose a more interesting and disquieting mode of dark comedy (and I’m sorry that, in 2011, I didn’t see the connection with climate change). This film could have done something more convincing with that mode of reverse-vertigo hinted at in its title: that fear and willed blindness about what looms over us. But if the movie helps to do something about climate change, such critical objections are unimportant."

Collider: "All that’s left is a film that feels overwhelmingly smug. Don’t Look Up is not a cautionary tale but rather a fatalistic refrain we’ve heard countless times before. It doesn’t have a single original insight and it’s too blithely contemptuous of everyone and everything to remember to tell a good joke. It’s an unrelentingly tedious experience where I agree with all of McKay’s points and find the manner in which he chooses to make them absolutely insufferable."

Hollywood Reporter: "The film gets so cluttered with surplus characters and gratuitous star casting that any satirical heft is pretty much steamrolled. McKay’s brand of satire never merely prods a target when there’s a sledgehammer to be swung. In McKay’s manically busy idea of plot development, the life-threatening discovery gets undermined by a whole world of heedless arrogance. " Don’t Look Up: Leonardo DiCaprio, Jennifer Lawrence’s Film Gets an Official Twitter Emoji.

AV Club: "When the movie occasionally drifts back toward character comedy, it’s possible to glimpse a way forward for McKay, toward a style of dramedy where the actors (and, for that matter, the dialogue) might have room to breathe and regain some semblance of looseness without choking on all the hectoring. McKay is one of the few comedy directors who knows how to shape improv into real scenes, something that feels decidedly lacking in this more serious-minded manifesto. What makes Don’t Look Up such a movie of the moment also makes it less of a functional movie at all, and more of a cranky, doomy, occasionally funny headspace."

Variety: "Comet denial isn’t the same thing as climate-change skepticism, obviously, but once we do acknowledge the problem, we can probably all agree that a Jobs-Musk-Branson billionaire isn’t the person to fix it (or in this case, to mine the comet for precious resources rather than destroying it). McKay’s tone may be grating, even if you don’t have to look far to see some version of what he’s ranting about in the real world. That makes Don’t Look Up a different kind of disaster movie, where the threat isn’t what’s to come so much as the state of affairs as they now stand."

Cate Blanchett and Rob Morgan also play key roles in the film. McKay has also penned the script of the new project. McKay will also produce under his Hyperobject Industries banner with Kevin Messick.

(The above story first appeared on LatestLY on Dec 08, 2021 10:58 AM IST. For more news and updates on politics, world, sports, entertainment and lifestyle, log on to our website latestly.com).