Top Gun Maverick: On Film’s Release Day, Tom Cruise Tweets ‘We Made It for the Big Screen, for the Fans’

Actor Tom Cruise returns to the franchise after 36 years in the sequel to the 1986 movie Top Gun, Top Gun Maverick. Says he made it for the fans and that he hopes they enjoy the ride. 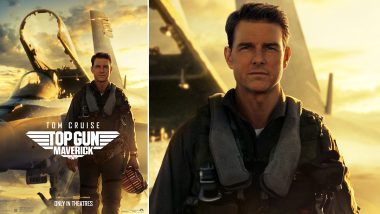 As Top Gun: Maverick is out for the audience, actor Tom Cruise shared his excitement about reprising the role of Lt. Pete Maverick' Mitchell after 36 years. "36 years after the first film, Top Gun: Maverick is finally here. We made it for the big screen. And we made it for you, the fans. I hope you enjoy the ride this weekend," he tweeted. Top Gun Maverick Movie Review: Tom Cruise's Legacy Sequel is a Gripping, Emotional Spectacle That Honours the Original!

The film is a sequel to the 1986 hit movie Top Gun. It was filmed well over two years ago and was one of many major Hollywood titles that became long-delayed due to the coronavirus pandemic.  Top Gun Maverick Full Movie In HD Leaked On Torrent Sites & Telegram Channels For Free Download And Watch Online; Tom Cruise’s Film Is The Latest Victim Of Piracy?

36 years after the first film, #TopGun: Maverick is finally here. We made it for the big screen. And we made it for you, the fans. I hope you enjoy the ride this weekend.

Maverick is set over thirty years after the events of the first film and sees Maverick returning to the Top Gun institute and training a group of graduates, including Rooster, the son of his late wingman Goose, for a specialised mission. Joseph Kosinski has helmed the second part.