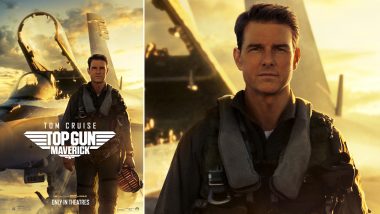 Top Gun: Maverick is the sequel to the 1986 film Top Gun. Tom Cruise would be seen essaying the character Captain Pete “Maverick” Mitchell in Joseph Kosinski’s directorial. Jennifer Connelly, Jon Hamm, Glen Powell among others would be seen in key roles. Top Gun: Maverick had its premiere at CinemaCon on April 28 and on May 4 it had its global premiere at the San Diego Civic Theatre in California, which also streamed live through YouTube. On May 18 the film was screened at the Cannes Film Festival. As per latest reports, Top Gun: Maverick has been leaked online and has also been made available for torrent sites and telegram channels. Top Gun: Maverick – Tom Cruise’s Film Gets an Inital 96% Rating on Rotten Tomatoes.

Top Gun: Maverick full movie in HD has been leaked on several torrent sites like Filmywap, Onlinemoviewatches, 123movies, 123movierulz, Filmyzilla, and other pirated versions of the series in HD (300MB free download in 1080p, 720p, HD online) are available for the audience to watch. Top Gun: Maverick Review – Tom Cruise’s Film Declared the ‘Most Satisfying Summer Action Movie’ by Critics.

Apart from Top Gun: Maverick, there are several other movies and series that have too become the victims of online piracy. It includes Jayeshbhai Jordaar, Don, Doctor Strange in the Multiverse of Madness, Puzhu among others that have also been leaked online and made available in HD prints.

(The above story first appeared on LatestLY on May 23, 2022 02:03 PM IST. For more news and updates on politics, world, sports, entertainment and lifestyle, log on to our website latestly.com).