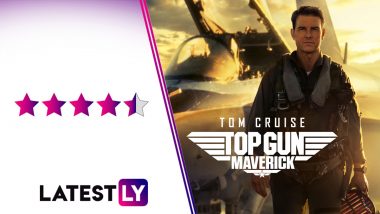 Top Gun Maverick Movie Review: Legacy sequels have been the go-to for a while now in Hollywood’s current market. With films like Blade Runner 2049 and Mad Max: Fury Road pushing the envelopes for how franchises can return in a proper form 30 or 40 years later, there are also disappointments like The Matrix: Resurrections. So going into Top Gun: Maverick, I was quite nervous, but the moment the first few notes of Danger Zone by Kenny Loggins hit, I knew I was in for a special time. Cannes 2022: Tom Cruise and Jennifer Connelly of Top Gun Maverick Grace the 75th Annual Cannes Film Festival (View Pics).

Directed by Joseph Kosinski, Top Gun: Maverick picks up some 30 years later after the original. Captain Pete “Maverick” Mitchell (Tom Cruise) has been reinstated for Top Gun, and is tasked with training a new bunch of pilots to take on a serious mission that will make him face the ghosts of his past. That ghost from the past being Goose’s son, Lieutenant Bradley “Rooster” Shaw (Miles Teller). 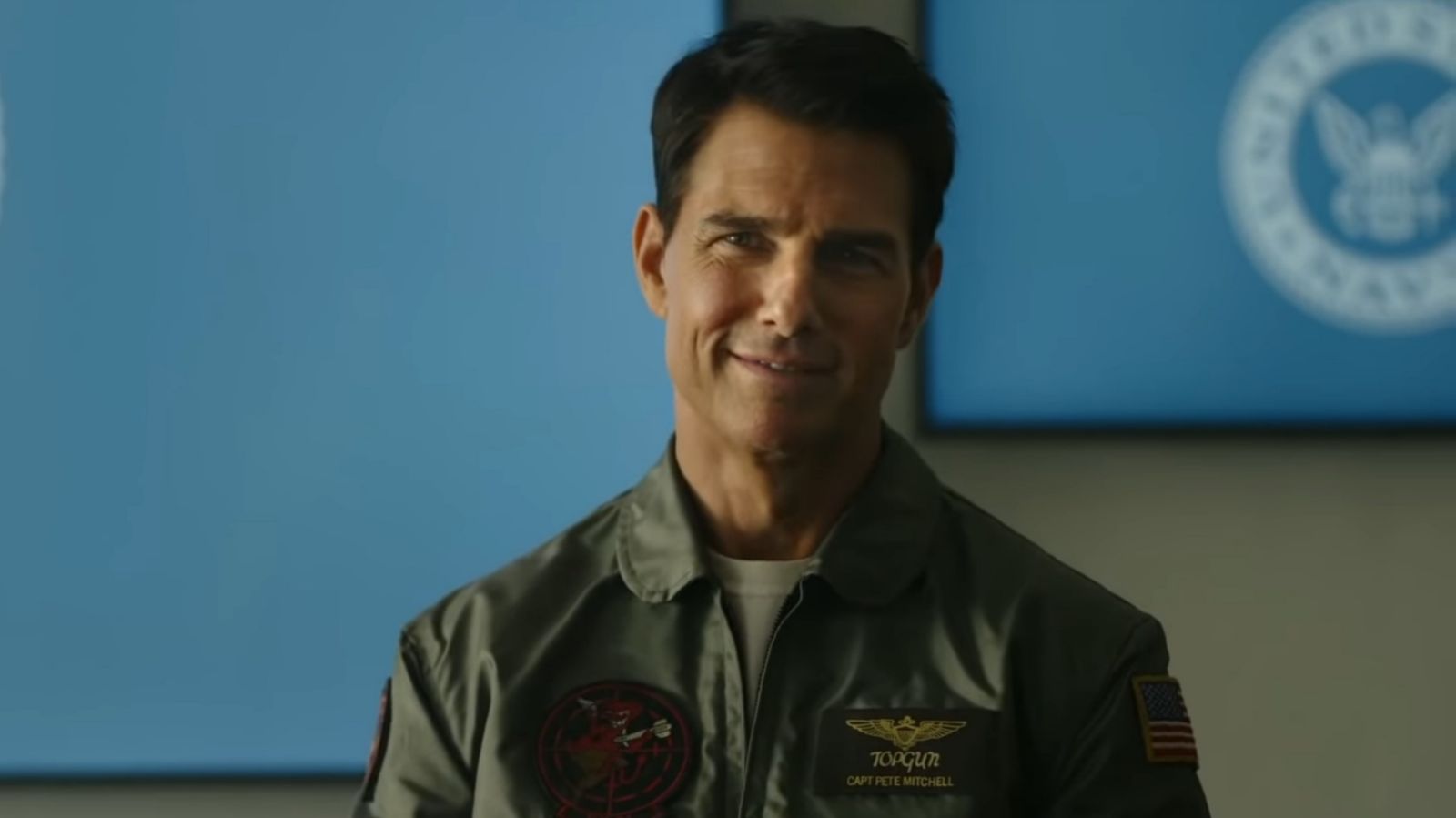 That dynamic becomes the heart of the film as Maverick has to train Rooster, who has some disdain for him. In the mix, we also have Vice Admiral Beau “Cyclone” Simpson (Jon Hamm) who tries his best to keep Maverick under check. It creates for some fun drama that helps create high emotional stakes that are paid off in the best fashion possible by the end of the film.

Top Gun has been extremely personal to me. I watched the original with my father at a young age, and ever since then the film just stuck with me. So, I couldn’t help, but fanboy over it at every second. The story here honours the original Top Gun. There are some visual parallels, that will feel extremely rewarding to long time fans. But not just that, it actually has genuine heart to it. Watching the movie, I was moved not just by the filmmaking aspect of it, but just how human the story felt. It’s all about coming together and working as a team. It’s very simple, but all of it is made so much more memorable by the journey we are taken on.

Tom Cruise has never been this good. Perhaps the most range he has showcased since becoming this huge action star, this is Cruise at his best. Having to live with the guilt of Goose and training his son at the same time, while known that his era is gone by. There is major heart shown over here, that only Cruise could have pulled it off.

Miles Teller surprised me here as well. While displaying his character's animosity towards Maverick for something he did in the past, Teller showcases some amazing chops as he maintains that anger and range while still trying to overcome it. That dynamic is what makes him standout among the others in the cast. 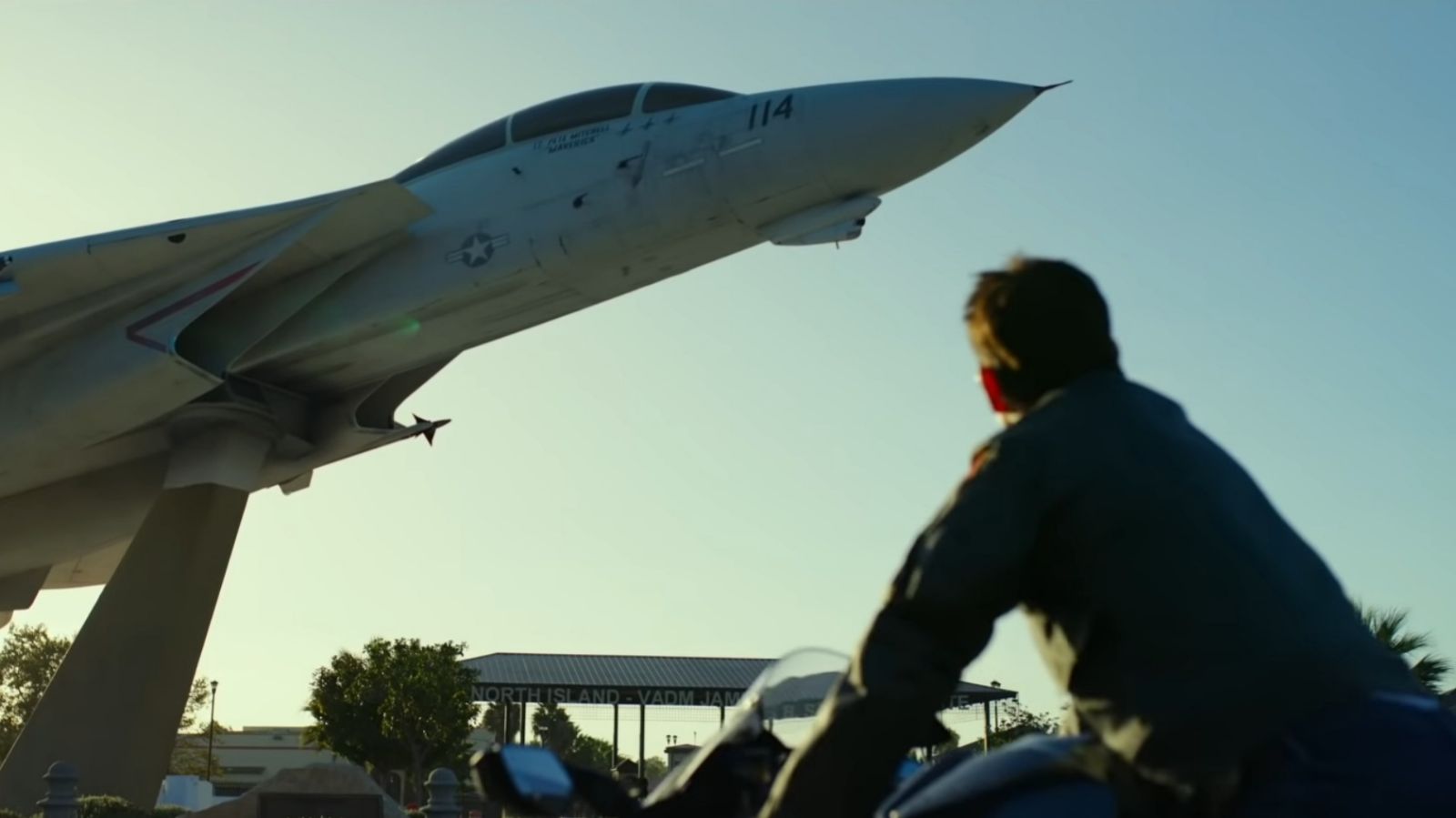 Glen Powell is also quite likeable as Lieutenant Jack “Hangman” Seresin. He is the Iceman Kazansky equivalent of this film, and nails the role. Mentioning of Iceman, Val Kilmer returns as well, and the scene he has in the film, will hit you in your feels. Talking about the students as well, it’s a charming group that is led by Maverick and echo that feeling of being rookies even more so than the original. Jennifer Connelly steps into the role of Penny Benjamin here, who was mentioned in the first film. Her chemistry with Tom is quite fun as well, although not on the same level as Kelly Mcgills’ Charlie had with Maverick in the first film.

But of course, you are watching Top Gun: Maverick for the flight scenes, and how were they? Saying that it had me on the edge of my seat would be an understatement. Recently, for me at least, Dunkirk had some of the best dogfight and aerial scenes. That crown has been taken by Top Gun: Maverick. 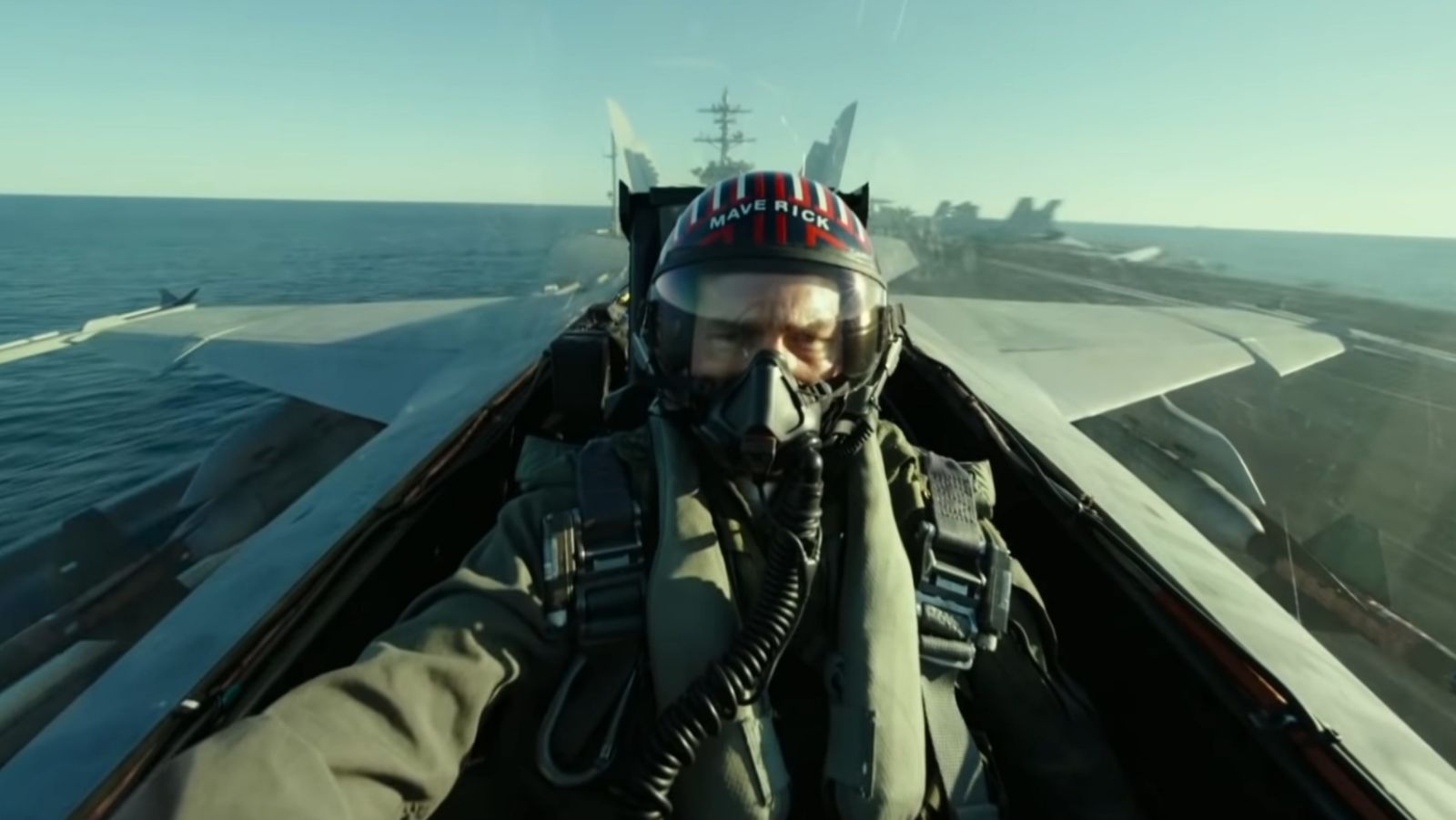 Tom Cruise does what he does best. Most of the scenes here are shot practically and you can feel that in the sense of how they are framed. Opening with a brilliant scene that involved Maverick pushing a jet to Mach 10, the cinematography is beautifully presented here. From the jet engines igniting and our seats shaking, this was an experience from start to finish.

At time I would just get vertigo from seeing the planes take a deep dive as the pilots would train to manoeuvre around these difficult environments. Not only that, but the dog fights are some of the most well thought out and framed action sequences I have seen in a good while. Cinematographer Claudio Miranda shoots the hell out of this movie. Every frame is oozing with amazing imagery that had me in awe every time. 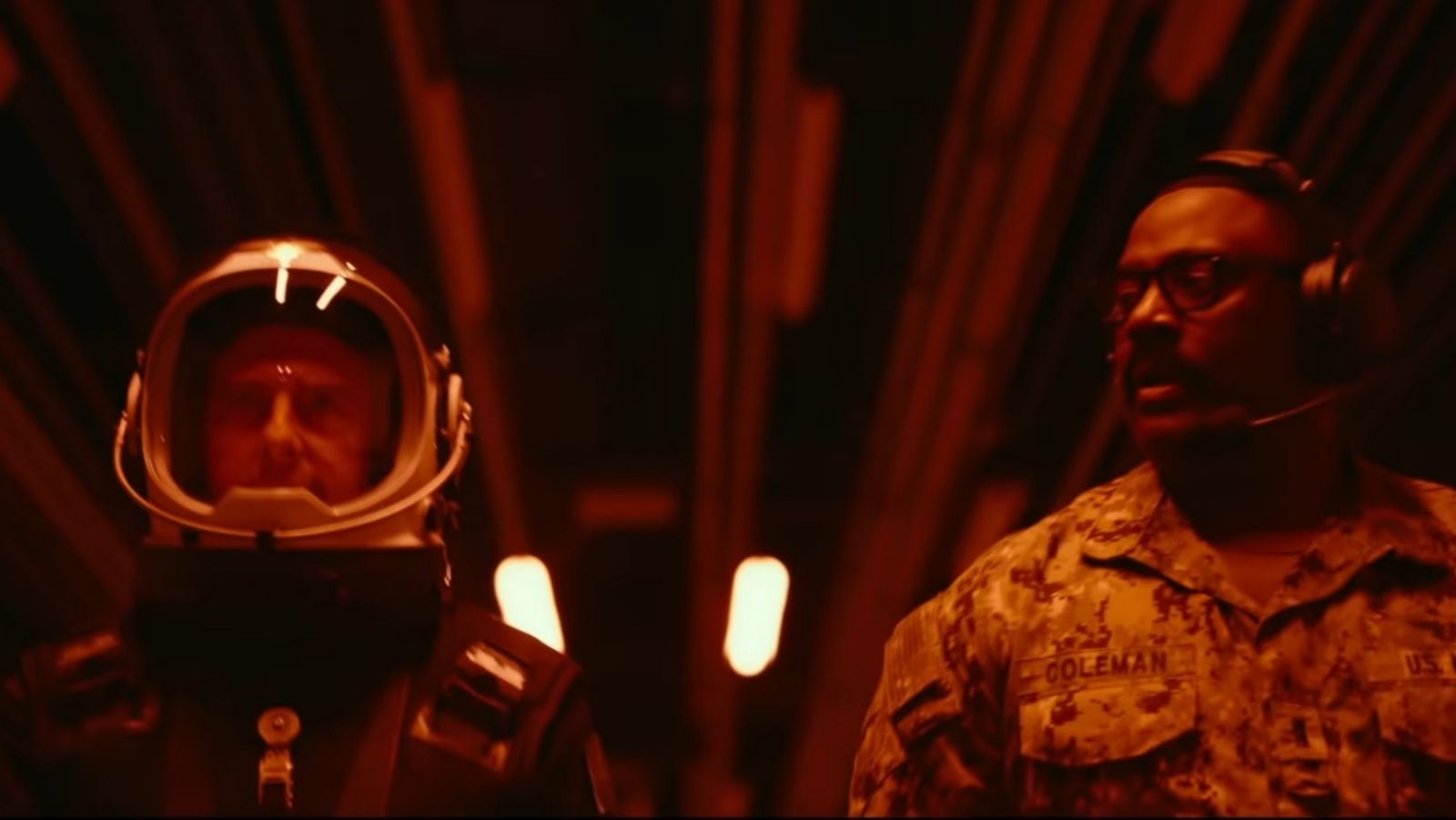 The third act is where the movie peaks as it takes a situation and keeps on turning it to a 100. Everything about it is the perfect recipe of how you should end a movie and shape up a climax. It’s just a really rewarding watch that every fan will love. Stranger Things Season 4 Part 1 Review: This Is the ‘Avengers Infinity War’-Level Adventure for the Netflix Saga! (LatestLY Exclusive).

If there is only one complaint I have about the film, it’s just that the chemistry between Penny and Maverick wasn’t as good as him and Charlie. That’s the only gripe I have, other than that, this is the perfect summer blockbuster that you can experience in theatres come this Friday.

Chemistry With Penny Wasn’t as Memorable

Top Gun: Maverick was everything I wanted it to be and more. This is the kind of movie that would inspire someone to pick up a camera and just start shooting whatever that comes into their mind in their backyard. Filled with tense and gripping scenes but never losing its heart, Top Gun: Maverick satisfied the fanboy in me and delivered a film that will stick with me (and hopefully for many others) for a very long time. Top Gun: Maverick releases in theatres on May 27, 2022.

(The above story first appeared on LatestLY on May 25, 2022 01:45 PM IST. For more news and updates on politics, world, sports, entertainment and lifestyle, log on to our website latestly.com).