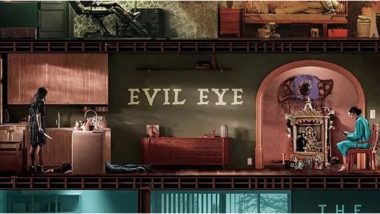 Amazon Prime is all set to release 8 horror movies which will thematically be tied to each other. The first four movies will release this October and the next four will come out in 2021. Tagged as 'Welcome to Blumhouse', the event will also have a movie backed by Priyanka Chopra. The actress' desi production house Purple Pebble Pictures teamed up with Blumhouse to make a horror movie titled Evil Eye. Priyanka serves as the executive producer. Today, as the slate of the film was announced by Variety, we have come to know that Priyanka's Evil Eye will start streaming from October 13. Priyanka Chopra’s Wanderlust Travel Pic Leaves Us Guessing If She is Heading for Matrix 4 Shoot!.

Evil Eye, directed by Elan Dassani and Rajeev Dassani, based off the award-winning, best-selling Audible Original production from writer Madhuri Shekar. The horror film about a mother's suspicions over her daughter's boyfriend's past features Sarita Choudhury, Sunita Mani, Omar Maskati, and Bernard White.

Other movies to be released under the Welcome To Blumhouse project are The Lie, Black Box and Nocturne.

On the work front, Priyanka Chopra's plate is full. She is producing a lot of content under Purple Pebble. We already know about her wedding comedy with Mindy Kaling for Netflix. She is also producing a reality show based on Sangeet ceremony with husband Nick Jonas for Amazon Prime. In fact, she has signed a first-look deal with Prime. She is developing, Sheela, where she will essay the role of Ma Anand Sheela. She is producing a lot of regional films in India as well. Priyanka Chopra Jonas Congratulates Kamala Harris for Becoming the First Person of Indian Descent to Compete on a Major US Party’s Presidential Ticket!

Priyanka stars in the upcoming Netflix movies like We Can Be Heroes and The White Tiger. She also stars in The Matrix 4, in a role that has been lept under the wraps. She will also star in Tulia as lawyer Vanita Gupta in Gordan's courtroom drama about racism.

(The above story first appeared on LatestLY on Aug 14, 2020 04:01 PM IST. For more news and updates on politics, world, sports, entertainment and lifestyle, log on to our website latestly.com).