Extraction: Chris Hemsworth Expresses His Love for Long Action Sequences and Speaks About the Climax of the Netflix Film 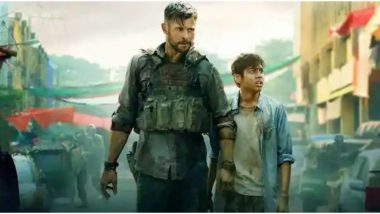 Hollywood star Chris Hemsworth says he likes to shoot non-stop action sequences so that he can keep up with the momentum. Recently, Hemsworth was seen doing some jaw-dropping action sequences in his digital film "Extraction". The film traces the journey of Tyler Rake (Hemsworth), a fearless black market mercenary, who is on a mission to rescue the kidnapped son of an imprisoned international crime lord. The film was shot in various different locations with the film's climactic sequence culminating in an epic gun battle over a bridge. Joe Russo Confirms Extraction 2 with Netflix, Chris Hemsworth Likely to Return.

Talking about the action packed climax, Hemsworth said: "The action was non-stop but I like it that way. Sometimes on a film when you have long waiting times, you lose momentum, especially with something so physical. "But using an actual bridge meant we could immerse ourselves in the action and the emotion. I've worked a lot with blue and green screens and your imagination has to do a lot of work to create the world. The bridge did a lot of that work for us," he added. Extraction: Chris Hemsworth Is ‘Blown Away’ by the Response to His Netflix Film, Thanks Fans for Love and Support on Behalf of the Team (Watch Video)

After scouting multiple bridges in India and Thailand for the final action sequence, the makers decided to shoot the climax at the Lat Bua Khao Bridge in Thailand's Ratchaburi. Once the bridge was secured, the art department began creating the blockade which is shown during the final escape sequence. The blockade consisted of a whole of 132 vehicles that were piled up on the bridge -- which included 14 pickups and SUVs, 40 sedans (including police cars), 19 light trucks and vans, 12 full-sized trucks (including an armoured military vehicle), 5 buses, 22 motorbikes, 18 tuk-tuks and 7 bicycle rickshaws.

Directed by Sam Hargrave, the film's screenplay is done by Joe Russo. The action thriller, which released on Netflix on April 24, also stars Indian actors Randeep Hooda, Pankaj Tripathi, Priyanshu Painyulli, and Rudraksh Jaiswal. The film is produced by Russo Brothers (Joe and Anthony Russo), Mike Larocca, Hemsworth, Eric Gitter, and Peter Schwerin, and is on its way to becoming Netflix's most-watched feature film ever. Meanwhile, "Avengers: Endgame" co-director Joe Russo has confirmed that he will be working on a sequel to "Extraction". Hemsworth and Hargrave are expected to return in the new action adventure.

(The above story first appeared on LatestLY on May 07, 2020 12:02 PM IST. For more news and updates on politics, world, sports, entertainment and lifestyle, log on to our website latestly.com).