Extraction: Chris Hemsworth Is ‘Blown Away’ by the Response to His Netflix Film, Thanks Fans for Love and Support on Behalf of the Team (Watch Video)

Hollywood star Chris Hemsworth has thanked everyone for loving his digital movie Extraction, which is on its way to become Netflix's "biggest film of all time". Hemsworth took to Instagram to post a video to express his gratitude about the response to the film, reports hollywoodreporter.com. 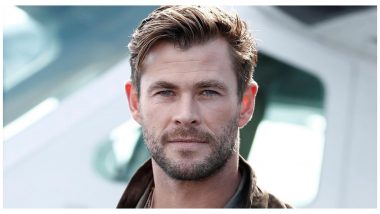 Hollywood star Chris Hemsworth has thanked everyone for loving his digital movie Extraction, which is on its way to become Netflix's "biggest film of all time". Hemsworth took to Instagram to post a video to express his gratitude about the response to the film, reports hollywoodreporter.com. "Hey, what's up guys, I hope you're doing well. I just want to say a massive thank you to everyone who checked out 'Extraction', you've made it the number one film on the planet right now," said the actor from his gym. "And it looks like it's going to be Netflix's biggest feature film of all time, which is absolutely mind blowing" he added. Extraction: From Chris Hemsworth and Randeep Hooda’s Stunts to the Bengali Rap Song, Russo Bros’ Netflix Film Gets a Rave Response on Twitter.

The "Thor" star went on to say: "We are blown away by the response and the support. On behalf of myself, the Russo Brothers, Netflix, our director Sam Hargrave, thank you so so much. We love you guys". He also addressed the rumors of a sequel to "Extraction". "There's been a lot of talk and questions about sequels and prequels and all sorts of things, and all I can say is who knows," said the actor, adding: "But with this amount of support, it's something I will be pretty stoked to jump back into." The action thriller released on Netflix on April 24, and attracted viewership from "an estimated 90 million households in the first four weeks" of its release, according to Hemsworth's previous Instagram post. Chris Hemsworth to Play Hulk Hogan in his Netflix Biopic by Joker Director Todd Phillips.

With "Extraction", argrave graduated from being Chris Evans' stunt double in "Captain America: The Winter Soldier" for fight scenes and stunt coordinator in "Captain America: Civil War" to a feature director. Hargrave was an additional second unit director in "Avengers: Infinity War". For his first film, Hargrave reunited with his "Avengers" family. He got "Thor" star Hemsworth to lead the film, screenplay of which is done by Joe Russo. The film is produced by Russo Brothers (Joe and Anthony Russo), Mike Larocca, Chris Hemsworth, Eric Gitter, and Peter Schwerin.

It revolves around Tyler Rake (essayed by Hemsworth), a fearless, black market mercenary, who embarks on the most deadly extraction of his career when he is enlisted to rescue the kidnapped son of an imprisoned international crime lord. It has been shot extensively in India, along with other places around the world. Originally titled "Dhaka", the film also stars Indian actors Randeep Hooda, Pankaj Tripathi, Priyanshu Painyulli, and Rudraksh Jaiswal.

(The above story first appeared on LatestLY on May 03, 2020 06:07 PM IST. For more news and updates on politics, world, sports, entertainment and lifestyle, log on to our website latestly.com).