Fans are going crazy to know more about Zayn Malik's third album Z3 and of course, the birth of his first child with Gigi Hadidi. But all they got is a tweet from him endorsing a Harry Potter puzzle. 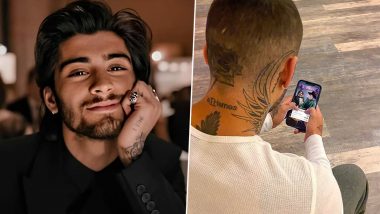 Zayn Malik and Gigi Hadid are all set to be parents. The supermodel has been putting up a lot of baby bump pictures on her Instagram account which makes many believe she is ready to pop. Malik's fans are deliriously happy about it and are waiting with bated breath to know if it's a boy or a girl. In the midst of so much anticipation, Zayn took to Twitter after 17 days to post about a Harry Potter puzzle. It definitely is a product endorsement by the ex-One Direction member but fans are not happy about it at all. They can't believe he decides to return to Twitter after so many days just to talk about a puzzle. Many were also waiting for some details about Z3, his third solo album. Diet Sabya Strikes Again! Targets Nora Fatehi’s Pachtaoge for Blatantly Copying Beyonce’s ‘Mine’ and Zayn Malik’s ‘Pillow Talk’ Video Concepts

The British singer had changed his Spotify cover photo and Twitter erupted with #Z3IsComing trend. Recently, Hadid's father Mohamed Hadid, had posted on Instagram that he was flying out to meet his daughter. They too are waiting patiently for the baby to arrive. That includes fans too. So you can imaging the disappointment when Malik's tweet did nothing to soothe their anxious nerves.

Here are the reactions:

i saw the notif and thought he was going to announce the birth of his child. nope. harry potter app. pic.twitter.com/6JKUWIo58s

*zquad patiently waiting for news on the baby*

Zayn: posts about Harry Potter + a pic on INSTAGRAM. pic.twitter.com/63d0hkcnDS

So much to know, so little said!

Zayn : "Got some stuff to show ya soon"

not you tweeting about a harry potter puzzle game when we have been going crazy over z3 since last 12 hours pic.twitter.com/5mPWqO40Ei

Liam, a member of One Director, too on his LIVE the same day mentioned about Harry Potter and now Zayn did too.

(The above story first appeared on LatestLY on Sep 23, 2020 06:22 PM IST. For more news and updates on politics, world, sports, entertainment and lifestyle, log on to our website latestly.com).