Diet Sabya was quick in drawing similarities between Nora Fatehi's Pachtaoge video and Beyonce's Mine. The creatives used in both the music videos are very similar, almost identical if we can say. 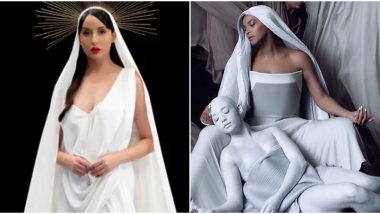 Nora Fatehi in Pachtaoge and Beyonce in Mine (Photo Credits: Instagram)

Watch out for Diet Sabya for the famous Instagram account is back to give our Indian celebs some sleepless nights. After targeting many designers in the past for borrowing ideas and concepts from the west, the account has laid its eagle sharp eyes on Nora Fatehi's new music single, Pachtaoge - the female version we mean. The new single was recently released by T Series and while the video looks all things glamorous, little did we realise the idea behind it wasn't theirs at all. Diet Sabya Slams Ananya Panday’s Rip-Off Fashion, Suggests The Actress To Fire Her Stylist (View Posts).

Diet Sabya was quick in drawing similarities between Nora Fatehi's Pachtaoge video and Beyonce's Mine. The creatives used in both the music videos are very similar, almost identical if we can say. In fact, the makers of Nora's next went a step further and tried incorporating a few extra additions err... we mean copying ideas from other music videos. Another Instagram user promptly noticed the similarity between Nora and Zayn Malik's Pillow Talk video which also featured his girlfriend, Gigi Hadid. The similarities were uncanny and this was surely not the case of simply getting "inspired". Katrina Kaif's Newly Launched Makeup Line Comes Under Diet Sabya's Radar for Getting 'Too much Inspiration' from Kim Kardashian and Winnie Harlow's Previous Ad Campaign.

@tseries.official out here stealing from THE QUEEN. Guts on 🐝!! . . Top: @beyonce MINE; bottom: @norafatehi in PACHTAOGE

Earlier Disha Patani's Do You Love Me from Baaghi 3 grabbed attention when it was accused was copying concept from TroyBoi's Do You song video. The music composed had even accused the makers of blatantly copying his idea without seeking any permission whatsoever. Guess, they are simply too lazy to use their brains for conceptualising something original and the concept of being 'aatmanirbhar' hasn't come to their attention yet.

(The above story first appeared on LatestLY on Aug 16, 2020 04:45 PM IST. For more news and updates on politics, world, sports, entertainment and lifestyle, log on to our website latestly.com).