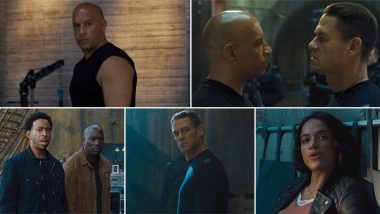 The novel virus originated in the Chinese city of Wuhan in December last year. A total of 105,586 confirmed cases of the COVID-19 have been reported worldwide as of Sunday, an increase of 3,656 infections from the previous day, including 3,610 new cases outside China. Many events around the world have been cancelled amid the outbreak, including film festivals and music concerts.

Release of much-awaited James Bond film "No Time to Die" has also been pushed by seven months to November, "Mission: Impossible 7" has pushed back its shoot and the China release of Disney's live-action "Mulan" is delayed.

But Diesel, who reprises his role as Dom in the ninth instalment of the franchise, said people need cinema now more than ever. Sylvester Stallone Spotted Wearing Latex Gloves While Shopping as a Precaution to Coronavirus Outbreak.

"I won't fault anyone in the world for saying, 'You guys are stupid for releasing this movie right now.' (But) we need movies now more than ever. We're already in a very interesting time where cinema and the cinematic experience is so threatened. So, yes, put it on record we're going to show up," the actor told USA Today. Diesel added he even "begged" the studio to let him go to China to promote the film. Pearl Jam Postpones Their North America Tour Due to Coronavirus Scare.

"I love to show up for the audience and for the fans because God knows how much they've showed up for me. I'm crazy. I'm begging Sony to let me go to China, even now. And you should see everyone's faces like, 'You're going alone, buddy!'" The cast of the film also includes Michelle Rodriguez, Jordana Brewster, Tyrese Gibson, Nathalie Emmanuel, and Chris "Ludacris" Bridges, as well as newcomer John Cena. Fast and Furious 9 is slated to be released on May 22, 2020.