Godzilla vs Kong delivers upon its fights but ultimately falters due to its disjointed plot. It’s not the best out of the monsterverse but at the same time it’s certainly not the worst, it’s definitely fun to watch due to its epic scale and set pieces. Read on. 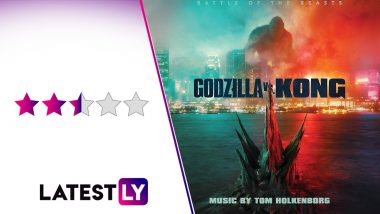 Godzilla vs Kong Movie Review: Back in 2014 when Godzilla came out in cinemas, a lot of fans were hoping to see King Kong and Godzilla fight again. Both these monsters being under the same production house now, that wasn't a far-shot possibility, having fought earlier on the big screen. Which makes the excitement around Godzilla vs Kong so understandable. Hailed in pop culture as two of the most iconic titans of all time, there was high fanfare surrounding this film. So does Godzilla vs Kong deliver? Well, yes and no. Godzilla vs Kong Review: Adam Wingard’s Sci-Fi Actioner Is Epic and a Visual Treat, Says Critics.

Directed by Adam Wingard, Godzilla vs Kong sure does deliver up on its name, which is two popular behemoths going at it with a definitive winner at the end. Both the fights with Kong and Godzilla are a feast for the eyes and deliver upon the monster aspect of the film. Fights ranging from a helicarrier in the middle of the ocean, to the neon-lit skyline of Hong Kong, the fight scenes are a treat and are just fun to look at on the big screen. The monsters are undoubtedly the stars of the show here.

Kong, especially, gets a lot of depth and personality over here. He feels a lot like the main character of the movie, as he helps the humans find the Hollow Earth. His relation with the little girl also makes it easier for us to root for him. Everything from the CGI to the cinematography involving both these monsters is amazing, and they are very emotive as well which in a way helps you understand as to what they are feeling. A little bit of world building is also added over here as you get to learn about where they come from as you journey into the Hollow Earth, it just helps in fleshing out this universe even more.

While not really as visually appealing as Godzilla: King of The Monsters, the movie still packs a good visual treat, especially the shots of Godzilla roaring in Hong Kong with neon all around him are amazing. The final fight really does benefit from this as well because it all just looks very cool. Another point to add that the fights never really pull back to the human drama that much when comparing it to the previous films, it is just two gigantic creatures beating the hell out of each other and thankfully that’s what you you want and that's what you get. Godzilla Vs Kong Early Reviews Are In! The Face-Off Between The Titans Gets Applause But The Human Characters Don't.

Also for a movie that’s named Godzilla vs Kong, you don’t really get much Godzilla apart from when you see him in the fights. That’s the only time the movie ever really even focuses on him, and due to how disjointed the plot is, there is no compelling reason for Godzilla and Kong to fight aside from the fact that their ancestors had a rivalry.

Coming to the nitpicking side as well, it didn’t sit right with me as to how the conclusion of the final fight came about, it just felt very silly and convenient for the plot.

- The monster fights are amazing.

- CGI and cinematography are really good.

Godzilla vs Kong delivers upon its fights but ultimately falters due to its disjointed plot. It’s not the best out of the monsterverse but its definitely not the worst. It's fun to watch due to its epic set pieces where you can just turn off your brain and enjoy it for what it is, two giants just going at it.

(The above story first appeared on LatestLY on Mar 24, 2021 09:57 PM IST. For more news and updates on politics, world, sports, entertainment and lifestyle, log on to our website latestly.com).