Hotel Transylvania Tranformania Ending Explained: Decoding the Ending to Andy Samberg and Selena Gomez’s Animated Film and How It Sets Up a Sequel! (SPOILER ALERT) 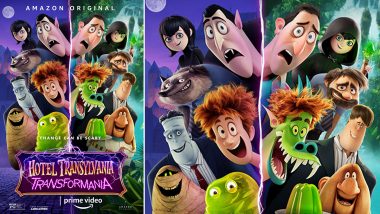 Hotel Transylvania: Transformania is the fourth film in the Hotel Transylvania franchise. Instead of opting for a theatrical release, Transformania premiered on Amazon Prime. Focusing on Dracula and his son-in-law Johnny, the movie sees Van Helsing’s “Monsterfication Ray” goes haywire and turns monsters into humans, and humans into monsters. Dracula and Johnny then go on a trip to retrieve a crystal which is their only hope at turning back into their normal selves. Hotel Transylvania Transformania Movie Review: Andy Samberg and Selena Gomez’s Animated Film is a Loud, Uninspired Showing With Some Decent Animation (LatestLY Exclusive).

The film itself was quite the loud but enjoyable experience. The animation quality over here was top notch and it has an unique concept for a plot too, but it still ended up feeling a bit uninspired. Thankfully, the third act does pack in enough excitement to bring Hotel Transylvania: Transformania back up to pace. The ending is also quite neat as it showcases a shift in the art style of the animation and hints that maybe other films might look like this. So here is the ending of Hotel Transylvania: Transformania explained.

After Johnny turns back to his normal self and the monsters including Dracula return to being themselves too, they make their way for the hotel. When they reach the hotel, they see that Gig, their pet Guinea Pig who was turned into a monster first, has destroyed it. The entire hotel is in shambles and turned to dust.

Dracula quickly gets out of the blimp and turns Gigi back into a Guinea Pig. Sad that his hotel is ruined and turned to shambles, Dracula changes his decision and lets Mavis and Johnny rebuild the hotel with their own vision and also gives them the key to the hotel.

We skip forward to a year later now. The hotel is rebuilt and Mavis and Johnny bring Dracula to see it for the first time. Shocked at it looking extremely similar, Dracula is overtaken with joy. But Mavis and Johnny tell him the hotel isn’t exactly the same. Dracula enters and sees that it’s more colourful, vibrant and fun. He looks concerned for a second, but accepts it and smiles after which the camera cuts to the credits.

With the hotel rebuilt now and Dracula retired, it looks like Hotel Transylvania 5 might feature Mavis and Johnny running the hotel. This can definitely shake up the dynamic going forward for the franchise. It looks like Dracula might be taking a step back in the films going forward and Mavis and Johnny might be the new leads. With Dracula also being more accepting of Johnny, this is a new character dynamic that can definitely be explored in sequels going forward. Hotel Transylvania: Transformania New Trailer Out! Selena Gomez' Animated Movie Confirmed to Release on Amazon Prime Video on January 14 (Watch Video).

Talking about change in animation and a new art style going forward, not exactly sure about that. At the end when the hotel is introduced to Dracula, the animation shifts to 2D. While the credit sequences for all the movies have been in 2D, this sequence takes place before the credits. Honestly it doesn’t look that bad. As a matter of fact it looks great and I think it could help with the shift in tone and characters going forward. But then again, not exactly sure about it.

(The above story first appeared on LatestLY on Jan 14, 2022 07:16 PM IST. For more news and updates on politics, world, sports, entertainment and lifestyle, log on to our website latestly.com).