Judi Dench and her partner David Mills considered marriage amid the Covid-19 lockdown after 11 years together but they have decided against it and are happy to continue to live in separate homes. 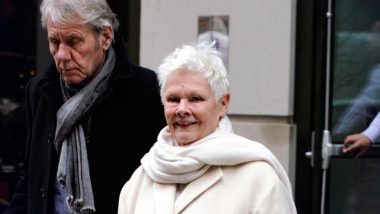 Iconic English star Judi Dench and her partner David Mills considered marriage amid the Covid-19 lockdown after 11 years together but they have decided against it and are happy to continue to live in separate homes. Mill, 77, who started dating the 86-year-old actress in 2010, shared with Daily Mirror newspaper: "We talked about that but I think we are far better off as we are as we have got two separate houses. And we are either in one or the other and we are four miles apart." Actress Judi Dench to Star in Hospital Drama ‘Allelujah!’.

Dench and Mills started dating nine years after the death of her husband of 30 years, Michael Williams, reports femalefirst.co.uk. Mills says he's "fine" with the scrutiny he's faced over the last decade. He said: "Initially it was a bit daunting but we go everywhere. It has made me famous but I have found it all fine. I have met all the Hollywood stars, I get on well with them. I am not an actor you see. I am not competition to them and that is how it works." Judi Dench Birthday Special: Skyfall, Shakespeare In Love, Philomena – Seven Movies Of The Actress That Are Simply The Best.

The 86-year-old actress earlier dismissed the possibility of tying the knot during an interview in 2020. Asked about the prospect of marrying Mills, she replied: "No, no, no, no, no. Let's just pull ourselves together and be our age!"

(The above story first appeared on LatestLY on Sep 23, 2021 11:31 PM IST. For more news and updates on politics, world, sports, entertainment and lifestyle, log on to our website latestly.com).