Justice League Snyder Cut trailer has really pumped up the audience and the wait ahead will be more difficult. Read on. 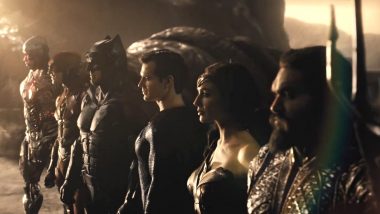 One of the hottest trailers that dropped during the DC FanDome panel on August 22 was Justice League Snyder Cut. Although a not-so-good quality teaser had leaked beforehand, however, that did not hamper the value of the OG trailer. Ofcourse, a lot of hard work went in making the trailer a visual treat and indeed it was wow. From Superman, The Batman, Flash, Diana to even the baddie Darkseid, the reveals were just jaw-dropping. All in all, Justice League Snyder Cut trailer has really pumped up the audience and the wait ahead will be more difficult. Justice League Snyder Cut Trailer: Zack Snyder Reveals Promo of His Version and His Darkseid at DC FanDome and Hallelujah, It Looks Good! (Watch Video).

As soon as the Synder Cut clip was out fans would contain their excitement and started pouring their emotions on the micro-blogging site. From sharing how impressed they were with the trailer, having a big wow moment over the superhero squad to even hailing the edits, netizens lost their mind for sure. Here are a few fans reactions below. Justice League Snyder Cut Trailer Breakdown: Darkseid, Black Superman, Cyborg’s Backstory, Flash’s Speed-Force and More – Just 25 Visuals That Caught Our Attention in Zack Snyder’s Version!

Not good as expected 😌#syndercut

Trailer for the #syndercut looks dope af! So glad its official. 2021 it is. #DCFanDome

Well, after going through the fans reactions above we bet if you are the one who has yet not watched the trailer, you'll instantly tune into it. Having said that, we want to know what is your take on the trailer? Tell us in the comment section below. Zack Synder's Justice League will debut on HBO Max in 2021.  Stay tuned!

(The above story first appeared on LatestLY on Aug 23, 2020 12:28 PM IST. For more news and updates on politics, world, sports, entertainment and lifestyle, log on to our website latestly.com).