The new trailer for the upcoming version of Justice League is peppered with tonnes of new footage. The trailer has already told us that it is taking a very different route from the 2017 film. There is an emotional pathos provided to the film. 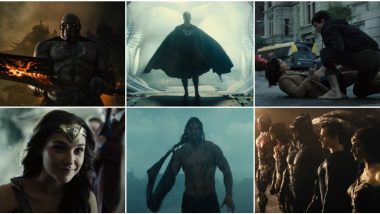 The first trailer for Zack Snyder's Justice League has dropped online after makings its debut at DC FanDome. And it is exhilarating. Unfortunately, a lower quality version of the trailer leaked on YouTube and Twitter right when DC FanDome event started. Warner Bros was quick to pull all links down but it was already too late. Many had watched it. But quite a many loyal fans chose not to watch it and took to Twitter to encourage others to follow suit. Great! The Snyder Cut of Justice League is a product of years of campaigning and arm twisting a studio. Of course, fans are not going to allow a leaked, mediocre version to ruin the hard work.

The new trailer for the upcoming version of Justice League is peppered with tonnes of new footage. The trailer has already told us that it is taking a very different route from the 2017 film. There is a stronger emotional pathos provided to the plot. There is a  scene where Cyborg sees his father die while fixing the mother box. Who knew the original draft had Barry AKA Flash saving a girl and falling in love, at first sight? Shots Fired! Zack Snyder Says 'Do You Bleed?' Dialogue Makes No Sense in Justice League.

Obviously, there was no point in keeping Superman's dead or alive status a mystery this time around. But, we still don't get enough footage of him in the trailer. We are glad that the popular black-suited Superman makes an appearance. We will take it as a hint that Zack Snyder has more tricks up his sleeve.

We don't get to hear any original sound from the trailer as all the footage unfolds while Leonard Cohen's "Hallelujah" plays in the background. It is an interesting touch, that already gives the movie a victorious vibe.

Also, we knew that Darkseid will be featured more in Zack's version of the film. But the trailer drops a bomb by revealing that Corvus Glaive is also going to be in the movie. So cool.

It is still not clear when Zack Snyder's Justice League will drop on HBO Max. Just '2021' is a pretty big timeline. 2021 December? 2021 Summer? TELL US! Anyway, stay tuned to LatestLY for more updates.

(The above story first appeared on LatestLY on Aug 23, 2020 12:51 AM IST. For more news and updates on politics, world, sports, entertainment and lifestyle, log on to our website latestly.com).