Justin Timberlake Apologises For Ill-Treating Britney Spears And Janet Jackson, Issues A Statement After Receiving Backlash For His Behaviour

The docuseries Framing Britney Spears has created a stir. It showed the hardships faced by the pop star and also how she was affected because of Justin Timberlake. 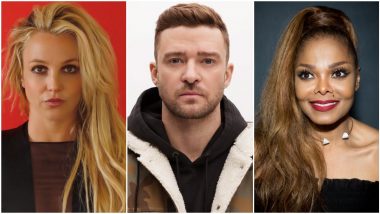 The docuseries Framing Britney Spears has created a stir. It showed the hardships faced by the pop star and also how she was affected because of Justin Timberlake. The duo had dated each other during their teens for a brief period. After the incidences between Justin and Britney’s relationship were highlighted, there were several who slammed the former for his behaviour with the latter after their breakup. He had indirectly accused her of cheating on him. Justin has now issued a statement not just apologising to Britney, but also to Janet Jackson for what he did to her during the 2004 Super Bowl. Framing Britney: Justin Timberlake Slammed By Netizens After Britney Spears’ Documentary Reveals Shocking Details.

Justin Timberlake and Janet Jackson had put up performance during 2004 Super Bowl event and he had accidentally exposed her breast. The ‘wardrobe malfunction’ had led to causing mass public outcry. It was Janet who bore the brunt of criticism. All these things have been highlighted in the docuseries and now Justin has issued a statement, apologising to both the singers.

Justin Timberlake wrote, “I am deeply sorry for the times in my life where my actions contributed to the problem, where I spoke out of turn, or did not speak up for what was right.” He also mentioned, “I specifically want to apologise to Britney Spears and Janet Jackson both individually, because I care for and respect these women and I know I failed. I also feel compelled to respond, in part, because everyone involved deserves better and most importantly because this is a larger conversation that I wholeheartedly want to be part of and grow from.”

Framing Britney Spears premiered on February 5. Besides this, the docuseries also highlights the pop-star’s conservatorship, where her father Jamie Spears is seen controlling over her career and financial affairs since 2008.

(The above story first appeared on LatestLY on Feb 13, 2021 08:54 AM IST. For more news and updates on politics, world, sports, entertainment and lifestyle, log on to our website latestly.com).