Michael J Fox Birthday Special: His Top 5 Moments from the First Back to the Future Movie 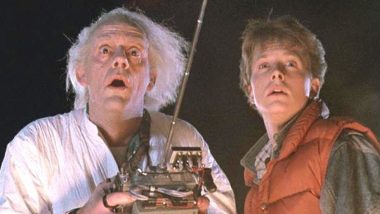 Michael J Fox in Back to the Future Part One (Photo Credits: Twitter)

Michael J Fox shot up to the sky by playing the role of Marty McFly in Back to The Future trilogy. It’s one of the roles that have defined his career and has been iconic for a long time. Back to The Future was a series of films that followed the adventures of Marty McFly and Doctor Emmett “Doc” Brown as they would cruise around different time periods in a DeLorean time machine developed by Doctor Brown. Michael J Fox Birthday: From Yes Boss to Massu, Did You Know These Popular Movies of Shah Rukh Khan, Akshay Kumar, Suriya Were Inspired by the Hollywood Star’s Films?

This sci-fi comedy developed by Robert Zemeckis has had quite an impact on pop culture and has been an inspiration for many time travelling stories. So since today it’s Michael J Fox’s 60th birthday, we will be focusing on the first Back to The Future and writing about the five best Marty McFly moments from the film. Natalie Portman Birthday: From Closer to Jackie – 5 Movie Quotes by the Powerful Characters She Played on the Screen.

We are introduced to McFly for the first time in the first few minutes of the film. We see him burst out his electric guitar as it is hooked to a really giant speaker. We then see him strumming it as the speaker immediately explodes, and there we get to know all about his personality, young, brash, reckless and total complete lack of authority. It’s a great introduction to this iconic character.

Travelling to the past

In pursuit, and Doc Brown presumably dead, Marty finds himself in a situation where he has to save his life and escape the people who are after him with guns. In an effort to escape the gunmen Marty quickly realizes that if he shoots the car above 88mph he will travel back to the past and that’s exactly what he does as he is shot back into 1955.

Just as soon as he arrives in 1955 Marty hides the DeLorean and starts exploring Hill Valley. He quickly finds his dad whom he saves from a car accident thus preventing George from meeting Lorraine and hence the future gets jeopardized. Marty who gets knocked out due to the accident, finds himself in Lorraine’s house as he wakes up and gets into quite an awkward confrontation with his future mom. The scene is hilarious and one of the highlights of the film.

In an effort to protect George from getting bullied by Biff, Marty starts an altercation with him and quickly it evolves into a chase as Marty makes a skateboard out of a box while being chased by Biff in a car. The scene is hilarious as it’s fun to see Marty outsmart Biff and watching the local pedestrians as they are shocked by seeing how Marty is travelling on a board with wheels.

In a final effort to get George and Lorraine together, Marty finds himself playing the electric guitar at the prom along with the band. Finally as Marty is about to perish due to his plan failing, George swoops up at the last moment and kisses Lorraine thus ensuring Marty’s existence again. It’s a fun scene that will make you giddy up with excitement and one of the highlights of the film.

(The above story first appeared on LatestLY on Jun 09, 2021 01:31 PM IST. For more news and updates on politics, world, sports, entertainment and lifestyle, log on to our website latestly.com).