Curb Your Enthusiasm offers plenty of opportunities for celebs to make cameos throughout the series, mostly as themselves. While actors like Ted Danson, Mary Steenburgen , Wanda Sykes, Richard Lewis, Rosie O'Donnell have more of a recurring role playing themselves, there are other actors who had smaller screentime, and yet left us with some very memorable laughs! 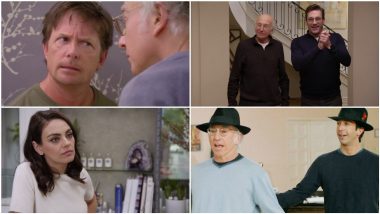 The HBO Show Curb Your Enthusiasm returns for its 11th season with its first episode already out a few days back. Created by Seinfeld fame Larry David, the series has him play a fictionalised version of himself, amping up his neurotic tendencies and snarky nature, that tends to piss off the people around him. Curb Your Enthusiasm is quite unapologetic about its brand of humour, though it doesn't let its very much flawed lead get away with his narcissism and often inconsiderate behaviour, but mostly he lands in trouble for his unfortunate luck! Larry David Birthday Special: 10 Hilarious Quotes From Curb Your Enthusiasm That Are ‘Prett-Ay, Prett-Ay, Prett-Ay Good’!

Since it is about a celeb playing himself and is quite renowned for making one of the most beloved sitcoms, Curb Your Enthusiasm also offers plenty of opportunities for celebs to make cameos throughout the series, mostly as themselves. While actors like Ted Danson, Mary Steenburgen , Wanda Sykes, Richard Lewis, Rosie O'Donnell have more of a recurring role playing themselves, there are other actors who had smaller screentime, and yet left us with some very memorable laughs!

The Back to the Future star had a very hilarious outing in the series appearing in season 8 finale, turning a rival for Larry David. What's special about this cameo, is how the actor uses his real-life affliction of Parkinson's' Disease for some laughs, with being offensive about it. Michael J Fox Birthday: How the ‘Back to the Future’ Actor’s Films Inspired Shah Rukh Khan, Akshay Kumar, Mohanlal, Suriya Movies!

In Season 10, Jon Hamm approaches Larry David to prepare for a role based on him, and keeps following him to ape his mannerims and body language. Needless to say, this form of method acting leads to some comic gold situation, as Hamm finds himself being an intrusive spectator to some of David's sticky personal situations. He also appeared in the first episode of season 11.

Despite his sociopathic tendencies, Larry David often gets the chance to date actresses. One of his most memorable dates was with Elizabeth Banks, that goes haywire after an encounter with Damon Wayans Jr's cop.

Of course, how can the Seinfeld cast stay away from the series about one of its creators? Julia Louis-Dreyfus and Jerry Seinfeld had longer run in Curb Your Enthusiasm compared to Jason Alexander and Michael Richards, but when the quartet came together for what is the most chaotic sitcom reunion, it totally lived upto the OG show's legacy. The best bit being the series poking fun at Richards' infamous racist rant. Seinfeld Is Now Streaming on Netflix! From Bryan Cranston, Courteney Cox to Bob Odenkirk, 13 Actors You Didn’t Know Appeared in the Hit Sitcom!

The FRIENDS star left an impact as Larry David's' co-star in the stage adaptation of The Producers, replacing Ben Stiller, Their cold camaraderie, compounded by a fiasco over a watch, was funny to watch as long as it lasted.

Speaking of The Producers, how can we forget the man responsible for the film and also for bringing Larry into  the stage play? The best part about Mel Brooks' cameo is the twist to his story, as to why he wanted to cast Larry David in the lead out of all the people. There is also a nice touch of his late Anne Bancroft also appearing in the scene with him.

The tennis legend, also known for narrating Netflix series Never Have I Ever, has a memorable outing as being the unlucky one of being chauffeured by Larry David, and having to end up getting smashed by mourners in his limo! Never Have I Ever Season 2 Review: Maitreyi Ramakrishnan's Netflix Teen Comedy Series Goes From Being Oddly Addictive To Excruciatingly Long.

Another Hollywood legend makes his cameo in the first episode of the new season (11). Albert Brooks, one of Larry David's friends, arranges a mock funeral for himself so as to hear what his well-wishers have to say about him. Well, not only does David make it a roast routine, the occasion also ended up with Brooks being accused of being a 'COVID hoarder', though he desperately denies those accusations!

In sporting circles, Shaquille O’Neal is nothing less than a legend. So imagine the spite Larry David attracted when, in trying to stretch his legs, he trips the basketball star during a match! What happens next, as David tries to overcompensate for his mistake is plentiful of mirth.

The musical genius of our time, the man who gave us Hamilton and Into The Heights, had a very terrific outing in the series. Lin-Manuel Miranda collaborates with Larry David for a musical play called Fatwa!. Of course, like every thing Larry is involved in, even the play goes horribly wrong, from a big-breasted interpreter distracting the men in the crowd to David dozing during the play to finally him and Miranda ending up in a duel!

The finale episode of season 10 sees Larry David start a spite store to undermine a rival, and inspired by his venture, several other Hollywood stars also start their own, including Mila Kunis, Jonah Hill and Sean Penn, that too for awfully hilarious reasons!

(The above story first appeared on LatestLY on Oct 27, 2021 05:31 PM IST. For more news and updates on politics, world, sports, entertainment and lifestyle, log on to our website latestly.com).