Paris Hilton Gets Engaged to Boyfriend Carter Reum, and Her Smile Shines As Bright as the Diamond on Her Finger (View Pics)

Love is in the air for Paris Hilton and Carter Reum! As the two are finally engaged. Yus, you read that right! The singer said 'yes' to her boyfriend on February 13, but today (Feb 17), she shared the pictures from the lovey moment on social media. Have a look. 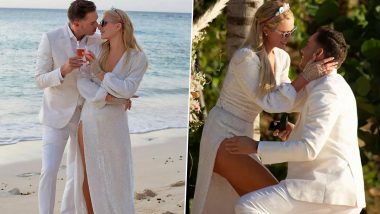 Love is in the air for Paris Hilton and Carter Reum! As the two are finally engaged. Yep, you read that right! The singer said 'yes' to her boyfriend on February 13, but today (Feb 17), she shared the pictures from the lovey moment on social media. It was the man who went down on his knees and proposed to Hilton while the two were celebrating her birthday on a luxuries island. The video montage which Paris has put on her social media is out of the world and so romantic. Paris Hilton Birthday Special: From Striking Red to Cool Blue, 7 Times She Made Some Jaw-Dropping Appearances (View Pics).

In the caption of the post, the model poured all her emotions and expressed how on her born day, Carter proposed to her, and she gave a nod. 'I said yes, yes to forever, There’s no one I’d rather spend forever with," she wrote. As soon as this news was out, celebs starting wishing Hilton and Reum on social media. Also, a few pictures of the diamond ring with which Carter asked Paris to marry him is all over the internet. Paris Hilton Can't Stop Praising 'Promising Young Woman'; Singer's 2006 Song 'Stars Are Blind' Features in the Film (Watch Video).

Talking about the couple's outfits, the two were colour coordinating on the private Island. While Paris was seen looking gorgeous in a dazzling thigh-high slit white dress, her man looked dapper in a crisp suit. Indeed, the pictures from the proposal moment are super. Also for the one's unaware, Reum is a venture capitalist and founder of investor firm, M13. Stay tuned!

(The above story first appeared on LatestLY on Feb 17, 2021 09:32 PM IST. For more news and updates on politics, world, sports, entertainment and lifestyle, log on to our website latestly.com).