You might remember Nick Jonas and Priyanka Chopra's proposal story. The American singer-actor shut down the store to buy just the ring for his girlfriend. Patrick Dempsey's proposal scene in Sweet Home Albama is the one we got reminded when we heard it. 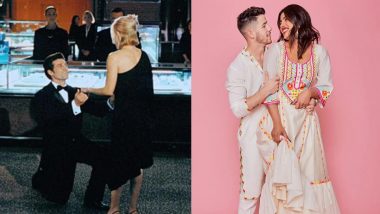 Patrick Mc Dreamy Dempsey's birthday is today. Lately, he has been in the news for all the wrong reasons but today we will most definitely not talk about that. Now before Dempsey became everyone's dream man by starring as Derek Shepherd in Grey's Anatomy, he has done several movies and shows. There were a lot of romantic dramas and one of them was Sweet Home Alabama. Our story about Dempsey stems from this. Grey’s Anatomy Season 17: Patrick Dempsey Opens Up About Returning to ABC’s Medical Drama with His Beloved Character Derek Shepherd.

You must remember reports of Nick Jonas' proposal to Priyanka Chopra. As per People, he closed down a Tiffany & Co. store to buy the diamond ring to propose to her. Now that reminded us of a scene from Sweet Home Alabama where Dempsey did just the thing for Reese Witherspoon. Only difference being, the proposal happened inside the store in the movie.

In the movie, Patrick plays a political hopeful who goes down on his knees to propose to his girlfriend. It's another story that while she is elated to accept the proposal, she doesn't end up with him. We aren't sorry that we spoiled the film here because there shouldn't be anyone alive who hasn't watched that film. Patrick Dempsey Birthday Special: 10 Stills Of McDreamy From Grey's Anatomy That Will Forever Be Our Favourites.

Guess what we aren't the only one who made this connection. People magazine and several others saw the resemblance too.

(The above story first appeared on LatestLY on Jan 13, 2022 09:50 AM IST. For more news and updates on politics, world, sports, entertainment and lifestyle, log on to our website latestly.com).