So after Timothy Dalton stepped down from the role of Bond, he was replaced by Pierce Brosnan to no one’s surprise. Brosnan himself is quite the handsome and a charming person, so the casting was like a match made in heaven. 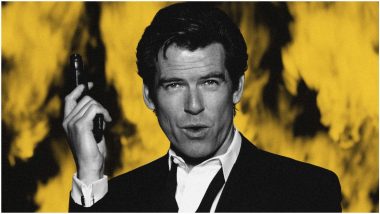 In pop culture, there is one character that defines a genre. The character being that of James Bond, who has appeared in spy films for a better half of the century. Bond as a character is beloved by many people and has been played by numerous actors, with each of them bringing their own unique take on him. So after Timothy Dalton stepped down from the role of Bond, he was replaced by Pierce Brosnan to no one’s surprise. Brosnan himself is quite the handsome and a charming person, so the casting was like a match made in heaven. Pierce Brosnan Birthday: 5 Films Apart From the James Bond Series That Need Your Attention.

To this day his is considered as one of the best interpretations of Bond by many people. Even though all of his movies weren’t that stellar with the exception of Goldeneye, the general consensus on his Bond is still great. He was the fifth actor to play the role and appeared in four movies. So to celebrate his 68th birthday, we are taking a look at 5 of his best moments as James Bond:

His First Meeting With M (Goldeneye)

In Goldeneye, we got a new M as well. Judi Dench made her debut as M and knocked it out of the park as her chemistry with Brosnan was unparalleled with the previous iterations of these characters. Both played their part well with M really putting a verbal smackdown on Bond and him just accepting what she says. It was a real dynamic change with these characters and a change that then went on to be a staple of the series.

A Wounded Bond (The World is Not Enough)

Bond has been portrayed as a flawless spy who doesn’t make many mistakes in the field, and this while a fun trait does strip him off his humanity, so to everyone’s surprise Bond having a shoulder injury throughout the film makes him look more like a real person than a superhero. He has to find new ways to get out of situations, and improvise which leads to some really fun encounters in the film. Pierce Brosnan Reveals His Malibu Home Still Has The Paintings He Took From The Thomas Crown Affair Sets.

While the film itself was not so stellar, it does lend itself to some really fun action scenes with the shootout at the printing press being one of the highlights of the film. This shootout itself then moves forward with a fun car chase with the newest Bond car that is remotely driven by a cellphone. Add all of this and you have a really great set piece.

In a scene that was already amazing starting with an amazing shootout, we see Bond pursue the bad guys in a tank to save Natalya. The set piece is amazing especially with the theme song blasting in the background while the chase is being played out. It then moves on to a missile train where Bond eventually saves Natalya and the train explodes. It caps off the sequence in an amazing way and it’s just great popcorn fun.

The fight between Alec Trevelyan and Bond is one of the best in the series. Especially taking the context behind the fight into consideration, the intensity is all the more great as you know that these two men used to be friends at one point of time. Just as Trevelyan is about to drop to his death from the satellite dish, Bond catches him by the foot and Trevelyan asks “For England, James?” and Bond replies “No. For me” and drops Alec to his death. This scene really solidified Brosnan as an all-time great choice for Bond as he delivers that line Flawlessly.

(The above story first appeared on LatestLY on May 16, 2021 09:11 AM IST. For more news and updates on politics, world, sports, entertainment and lifestyle, log on to our website latestly.com).